I’m afraid my website has yet again been hacked into, so Colin, my website manager, has suggested I make it more difficult for people to make comments, at least for the time being. I apologise if this causes any inconvenience.

However, I can still be contacted by clicking on to  “Contact Jenny” at the right-hand side of the home page.

On a more positive note, I’m pleased to report that the first draft of the new book is ready to be sent to the publishers. Oh, and the sun is shining here today, although it is cold; the primroses and hellebores are brightening up the garden and the daffodils are beginning to come into flower. Perhaps spring will come before too long and I will be able to take the few remaining photos for my book. 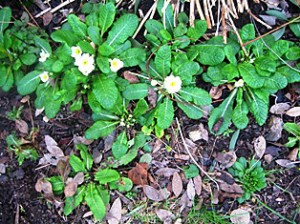 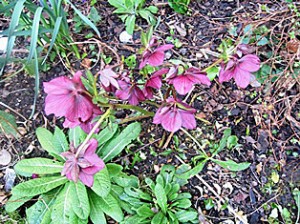 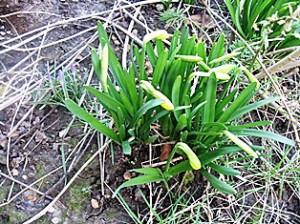 On Leena Riihela’s blog there is a post with some useful comments about some Finnish sources of information about chickweed and some suggestions as to how the misleading notion that chickweed could be used as a mordant might have come about. The post is written in Finnish but there is an English translation underneath. Some of the comments on Leena’s post are also interesting.

If you click on the link to “Riihivilla” on the right hand side of my blog, you will find a link there to Leena’s blog.

Also, in a German dyeing book, “Farben aus der Natur” by Gretel Fieler, published in 1981, I have found a reference to a recipe from 1817 in a German dyeing book by Johann Hinrich Ehlers, in which he mentions the use of chickweed plus alum as a mordant used with logwood for dyeing shades of blue. However, although chickweed is mentioned in the mordanting paragraph, alum is added to the chickweed solution before the wool is mordanted, so it is the alum which is the true mordant here, not the chickweed. I think it is possible that the chickweed may have been used for its potash content, which could shift the colour from the logwood from purple towards blue. It is interesting to find such an old recipe, which is almost identical to those mentioned in the more recent books from so long ago.

Now I must find the time to try out this recipe with chickweed, alum and logwood, to see how it compares with the colours from logwood when chickweed is not included. But before I do anything else, I must continue working on my new book.

Before anyone gets too excited, I’m afraid the answer to the question posed in the title would seem to be “No, probably not.” So where did I get the idea that chickweed might be used as mordant?

Last year I read an interesting article in “The Journal for Weavers, Spinners and Dyers” about natural mordants. The article was written by Krista Vajanto, who teaches textile history at the University of Helsinki, Finland and is researching Iron Age Finnish textiles. Among the details of the better-known natural mordants (rhubarb leaves, tannin, aluminium from clubmoss) was a mention of chickweed. The positioning of the comment gave the impression that chickweed might also be an aluminium accumulator and if this were the case it would, of course, be extremely useful for dyers who want to use only natural mordants from plants.

Chickweed (Stellaria media) is a common weed in many gardens (although, rather annoyingly, not in my garden) and apparently several Finnish dyeing books from the 20th century mention using chickweed as a “natural mordant”.  Unlike clubmoss, chickweed is not rare and could therefore be used freely for dyeing, so I decided to do some experiments to test its potential as a “natural mordant”. The article stated that chickweed should be used fresh but unfortunately it proved impossible to locate any fresh chickweed. So, as I usually extract aluminium from dried, rather than fresh, clubmoss, I thought it ought to be possible to use dried chickweed, which I bought from a supplier of dried herbs.

I then made a dyer’s broom dye bath and dyed skeins treated with clubmoss and chickweed and also alum-mordanted and unmordanted skeins in the same dye bath. The results were interesting. The alum-mordanted skein and the skein treated with clubmoss dyed a very similar yellow, indicating the presence of aluminium in the clubmoss. The skein treated with chickweed and the unmordanted skein dyed to almost exactly the same shade of pale yellow, which suggested that there was no aluminium present in and extracted from the chickweed. Although I wasn’t able to use fresh chickweed and I admit I might have got different results had I been able to do so, I have so far come to the conclusion that chickweed is unlikely to prove useful as a natural mordant. Indeed, I feel certain that, had it been useful as an alternative to alum, dyers would have been aware of that fact long ago. However, I will reserve my final judgement until I have managed to try the same experiments with fresh chickweed, just in case.

So how did this belief originate? I have come to the following conclusions. Firstly, the term “mordant” tends to be used very loosely in some literature and often seems to mean “anything that can be used as a base for other dyes or as an addition to a dye pot”. I suspect that, when applied to chickweed, the term “mordant” was being used in that rather loose sense. I believe it is possible that, in situations where it might have been difficult to obtain more expensive dyes or chemical mordants, plants such as chickweed, which grow abundantly as weeds and give a light yellow colour, might have been used as a base for more expensive or difficult to obtain yellow dyes, in order to reduce the quantity required of the more precious dyestuff. So the belief might come about that, if chickweed “helped out” with yellow dyes, it might also have a similar effect with other dyes.

But I’m afraid I feel it is unlikely that chickweed has ever truly been, or indeed is ever likely to become, an alternative “mordant”. Unless, of course, experiments with fresh chickweed suggest otherwise but first I must find some. 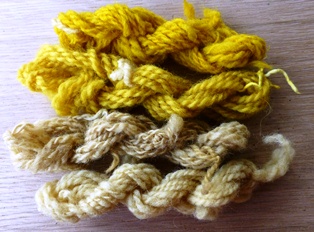 From the top: alum mordant, clubmoss mordant, chickweed base, no mordant