The seeds for this grass (Arthraxon hispidus) were sent to me by a Japanese dyer, who explained that this grass is used traditionally by dyers in Japan, where it is common on meadows and roadsides. It is also grown as a dye crop on the island of Hachijo.

The seeds germinated readily when sown in the Spring several years ago and now the plants self-seed, so each year a fresh crop of plants appears.

Arthraxon hispidus contains luteolin, which is the main colour pigment in weld and dyer’s broom. Although the yellows from this Japanese grass are not remarkable, I enjoy growing and using traditional dye plants from other countries, especially when the seeds have been sent to me by a fellow dyer.

The photo below doesn’t really do justice to the colours, which are actually brighter than they appear here. As with weld, the yellows from Arthraxon hispidus can often have a greenish tinge. 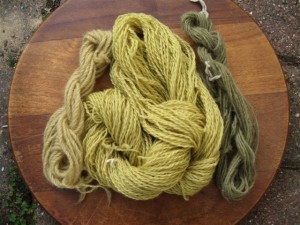 P.S. to my Recent Woad Experiment A Natural Dyeing Project in Uganda
Scroll to top