Weld (Reseda luteola) and dyer's broom (Genista tinctoria) were used by Anglo-Saxon dyers for yellows and remain in use today because of their reliability. Yellow tends to be the natural-dye colour that fades most rapidly but yellows from weld have better fastness properties than most other yellow dyes. Dyer's broom has similar dye pigments to weld and also has good fastness.

Using an alum mordant gives the brightest yellows and clubmoss mordant produces very similar shades. If these dyes are used without a mordant the colour is considerably less bright. However, if an alkaline modifier is applied to these unmordanted dyed fibres, by soaking them in wood-ash-water, the colour becomes almost identical to the yellow achieved on an alum mordant. So, even if early dyers did not have access to mineral alum, they would still have been able to achieve bright, clear yellows from weld and dyer's broom.

The use of tannin as a mordant makes the colours deeper than they would have been without a mordant but this yellow lacks brilliance.

The use of an iron modifier after dyeing produces moss green shades on all fibres, although the green achieved on unmordanted fibres and those mordanted with tannin is duller. 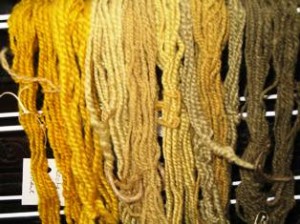 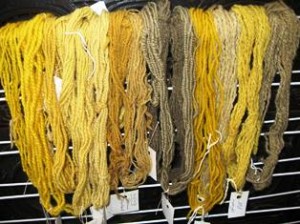