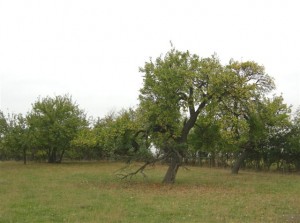 This now disused orchard near Eaton Bray in Bedfordshire has many old damson trees of a variety known as Aylesbury Prunes.

This area was known for growing damsons, apparently used to dye hats for the Luton straw hat industry. It has also been suggested that damsons may have been used to dye British Royal Air Force uniforms a blue-grey colour during World War II and damsons were reportedly used in the past as a source of dye colour in the wool industry in the North of England. 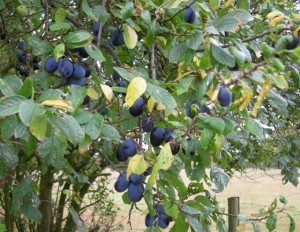 This photo shows the damsons ready to be picked.

I am fortunate that my friend Maggie Stearn, handweaver and dyer, lives in Eaton Bray and she suggested harvesting some damsons for a dyeing experiment, to see just how effective they might be as a source of dye colour. Maggie kindly picked about 20 kilos of damsons, so we had ample for dyeing –  and for freezing and jam-making, too!

For our tests we used the damson skins only, as they seemed the most likely source of dye colour and are rich in tannin which would help fix the dye. However, we did test the fruit pulp as well, just to be sure we weren’t missing an important source of colour, but this only resulted in an unpleasant pale beige colour and sticky pulp that was difficult to remove from the fibres. We used equal weights of skins and fibres and we tested the dye extracted from the skins across a range of fibres (wool, silk, cotton and linen), all mordanted with alum, and used four modifers.

The results of our experiments are below. I have to say that they confirm my feeling that damsons, like most red and purple fruits or berries, do not make particularly useful dyes. In general the colours are disappointing, particularly on wool, although with an iron or copper modifier the colours on the other fibres tested, especially the silk, are more attractive. The greens from the washing soda modifier are interesting and I have achieved similar, but deeper, shades from elderberries with an alkaline modifier. In general, I find it surprising that there should apparently be so many references to damsons as a source of useful dye colour. I can understand that the pale lavender shades achieved on some vegetable fibres, including raffia, might be popular with Victorian ladies for their straw hats, but I find it harder to believe that the colours achieved on wool could really be useful at an industrial level, especially bearing in mind the general unreliability of red and purple berry and fruit dyes. However, I do wonder how many of these references are actually based on solid research, backed up by conclusive evidence, rather than merely on hearsay. I can certainly understand that any abundant local source of dye colour would be valued at times when imported dyes were unavailable or too costly, but I remain unconvinced that the use of damsons for dyeing would be worth the effort nowadays, especially when dyers have access to more reliable sources of purple and lavender shades. 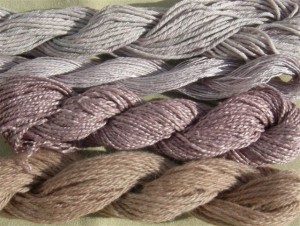 This shows the unmodified samples. From top to bottom: cotton, linen, silk, wool 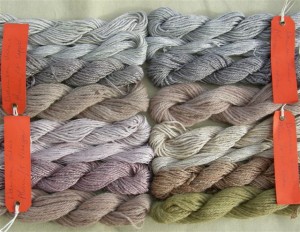 This shows the modified samples on all four fibres.

NOTE: Thanks to Maggie Stearn for all the above photos