2010 brought many changes in my life and also the long-awaited reprint of “Wild Colour”, this time in a new, revised edition. Once again, I’d like to express my gratitude to Mary Walker, who arranged the Facebook page for the book, and to all those who supported our efforts to persuade the publishers to reprint “Wild Colour”. Having tried unsuccessfully myself so many times, I know I could certainly not have achieved this on my own. So sincere thanks to you all.

As the holiday season approaches, I’d like to wish everyone a very happy Christmas and all the very best for 2011.

I suspect I am not alone in sometimes finding it difficult to achieve a really deep brown from walnut hulls. However, one solution to this problem is to use fresh green walnut hulls, rather than dried brown ones. This Autumn I was lucky enough to harvest some walnuts and, after eating the nuts, I saved the green hulls to use for dyeing. I left the hulls until they had started to become brown before I simmered them until the liquid was deep brown in colour. I then strained off the liquid, added some unmordanted wool skeins and simmered them for about an hour. I left them to steep in the cooling dyebath overnight before rinsing and washing them.

As can be seen from the first two skeins in the photo below, this dyebath gave a rich deep brown and the exhaust dyebath gave a paler shade. Now I just have to find a reliable source of fresh walnuts each year. However, I should be able to use these hulls for a year or two, as I always save the used hulls, plus their liquid, to use again and again. Don’t worry if mould forms as time passes – this will only improve the dye.

I also made a dyebath from fresh walnut leaves, which gave paler browns. (See the last two skeins in the photo below.) 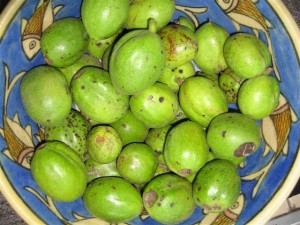 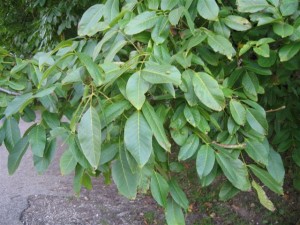 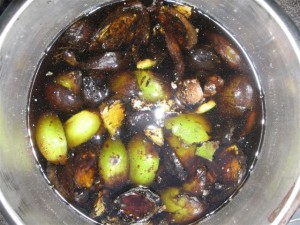 The walnut hulls simmering to make the dyebath 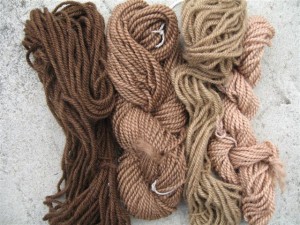