Findon, the village in West Sussex where I now live, has its own Sheep Fair, which takes place every year on the second Saturday in September. Findon Sheep Fair can be traced back to the 13th century and is run entirely by volunteers, who do an excellent job. After a few bleak years following the outbreak of foot and mouth disease, when no sheep were actually allowed at the fair, Findon Sheep Fair has gone from strength to strength and is an important event in the village.

There are many sheep sections and also some other animals and birds of prey. In addition to the animal attractions, there are sideshows, food stalls, a craft marquee and a fun-fair, so there is plenty for all the family. This year I joined other members of the West Sussex Guild of Weavers, Spinners and Dyers and we demonstrated spinning in the craft marquee.

One of the main attractions of the fair is The Sheep Show with its dancing sheep. (Yes, these sheep can really dance in a sheep-like fashion! If you enter “Dancing Sheep” or “The Sheep Show” into your search engine you will be able to see the dancing sheep for yourselves.) The two photos below show the sheep during their performance. 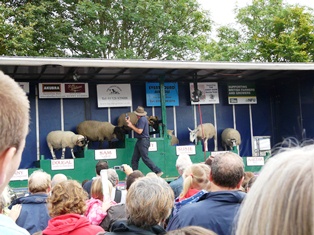 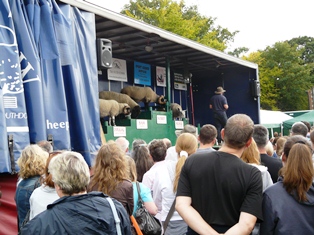 This year children from the local school were invited to show sheep. This photo shows some of the younger competitors leading their sheep around the ring. 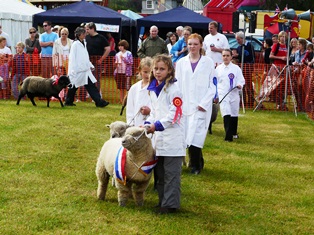 Below some more sheep parade round the ring. 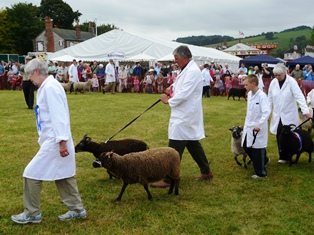 Jacob sheep in their pen 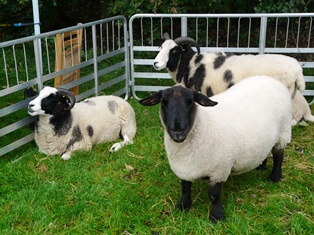 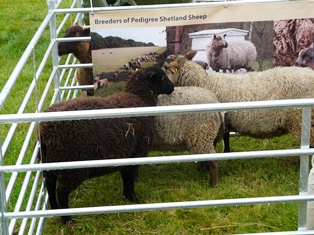 And last but not least the local Southdown sheep 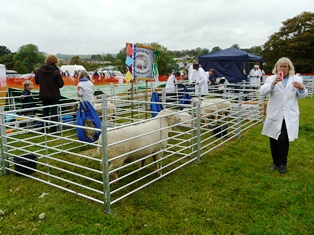 Another interesting technique from India Flint's book "Eco Colour" is what she calls "ice-flowers". This involves the collection of purple and deep red flower petals (which contain anthocyanins), which are then frozen in plastic containers or sealed plastic freezer bags for at least two days. Following India's instructions, I collected the dead-heads from purple violas over a period of several weeks and froze each batch of flower heads as soon as I had collected them, adding them to the plastic bag in the freezer. When I was ready to use them, I tied a handful of frozen flower heads into a muslin bag, immersed this bag in lukewarm water and squeezed it to extract the colour. The liquid soon became a rich purple colour and I removed the bag with the flowers and then stirred a teaspoonful of alum sulphate into the solution. (I added alum because the materials I intended to dye had not been mordanted. Next time I try this method I'll make sure I have some pre-mordanted fibres ready to use.) I then put some cotton and silk fibres into the liquid and left them to steep overnight.  More colour variations are possible if other substances, such as an acid or an alkali, are added to the solution, so I still have much scope for experimentation. (I later added a wool skein to the exhaust dye bath and this became an attractive light leafy green.)

The photos below show, from the top: the frozen viola flowers ready for colour extraction, the dyed materials (silk on the left and cotton on the right)), a closer view of the dyed silk fabric, and finally a closer view of the dyed cotton fabric. The dyed skein is cotton and the dyed cotton fabric is the bag in which the flowers were tied. The attractive variegated colour effects on this bag are probably the result of the flowers being pressed against the fabric. As with the leaf prints, I must test these ice-flower dyes for light- and wash-fastness, once the colours have had time to mature. 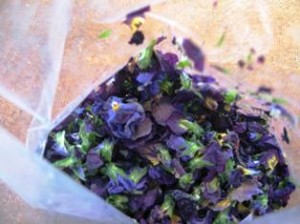 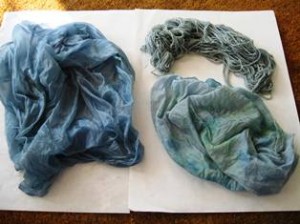 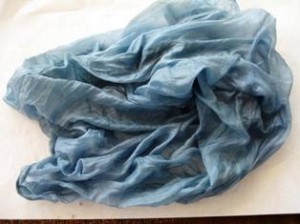 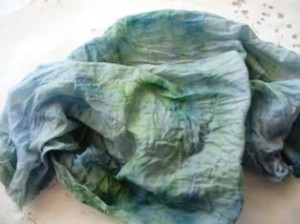 Recently I was inspired by India Flint’s book “Eco Colour” to experiment with leaf prints. India’s book contains a wealth of ideas and is full of beautiful images of her printed fabrics. This fascinating technique has become very popular among dyers and can have really lovely results.

I collected some leaves from my garden, mainly from a eucalyptus tree and a Judas tree (Cercis siliquastrum), and used cotton and silk fabrics mordanted with alum. (I decided to pre-mordant the fabrics to improve the fastness of the colours.) I placed the leaves on the wetted cotton fabric, added a few rusty nails, put the silk fabric on top of the cotton fabric and then carefully folded the fabrics into a bundle, which I tied with string. I decided to put this bundle into the compost bin my husband uses for grass clippings, as it can get quite hot in there and this therefore seemed a useful way of setting the dyes.  After four days, I removed the bundle to reveal the results below. Now I need to do some light- and wash-fastness tests to see how fast the colours achieved from this method will be. 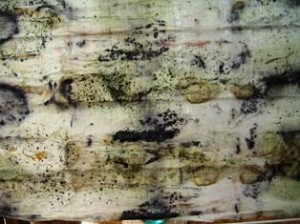 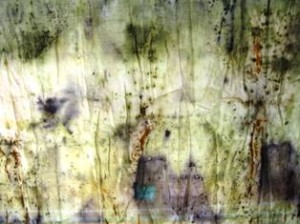 Our new garden is beginning to take shape and to look and feel more like “ours”. The beds I dug out of the grass earlier in the year are now full of colour and visited regularly by butterflies, bees and other beneficial insects.

The first two photos show general views of the back garden. The following photos show some of the plants in my dye garden: madder, weld, dyer’s broom, lady’s bedstraw. woad in seed with dyer’s broom on the right and dyer’s chamomile with my small purging buckthorn bush in the background. 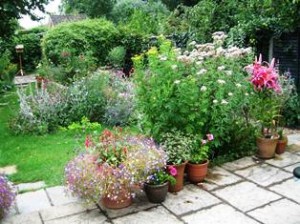 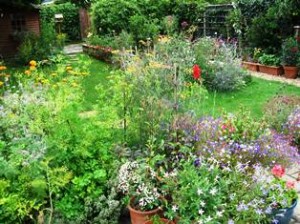 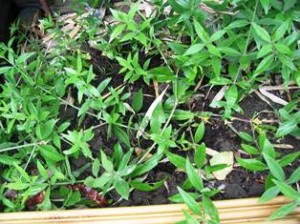 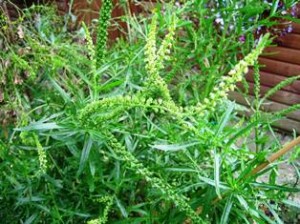 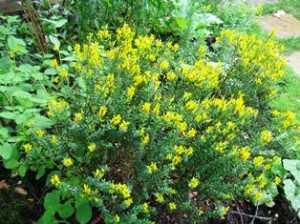 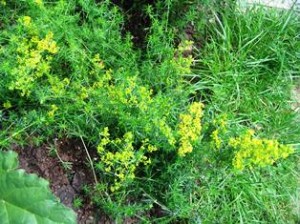 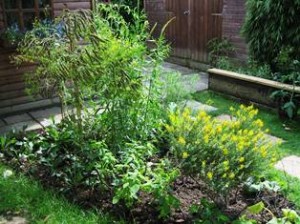 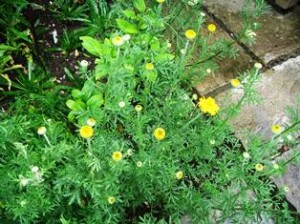