Snow is a  relatively rare occurrence here in West Sussex and we have about 3 inches at the moment but I know this will not impress those of you who live in countries where there is “proper” snowfall. In a news item on the radio about the cancellation of flights at Heathrow airport yesterday, I heard a Canadian say: “I don’t know what the problem is. This is just like a lovely spring day where I live in Canada.”

Today we have enjoyed watching some intrepid goldfinches feeding on the seeds left on our teasel heads. Although our garden is small, I like to grow teasels to give some structure to the garden, especially in the winter. As added bonuses, the flowers attract bees and butterflies and the seed heads provide interest in the autumn and winter and food for goldfinches. 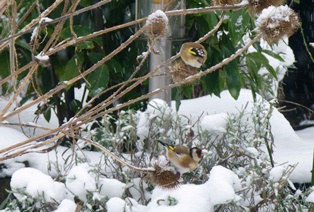 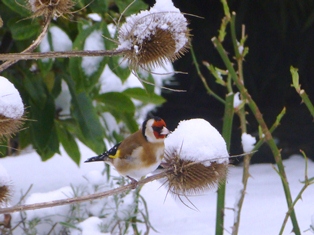 Just before Christmas I noticed some new dye extracts in liquid form on the D T Crafts website (see link on the right) and, as these are new to me, I ordered some. The dyes are called Botanical Colors Aquarelle and have been certified as compliant with the Global Organic Textile Standard. So my first dyeing project for 2013 has been to try them out.

The dye extracts offered in liquid form are Madder, Lac, Himalayan Rhubarb, Cutch and Saxon Blue. These dyes come with clear instructions and are simplicity itself to use, as they are just added to the dye bath water and stirred in.  They work equally well on all natural fibres, although Saxon Blue tends to produce paler shades on vegetable fibres. A little goes a long way, so I feel they are reasonably priced.

The photos below show some of the colours. 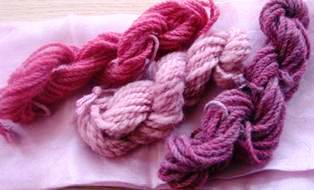 LAC: The wool skein on the left was mordanted with alum, the central skein was unmordanted and the skein on the right was another unmordanted skein, this time over-dyed in Saxon Blue. The skeins are shown on unmordanted silk fabric dyed in the exhaust dye bath. 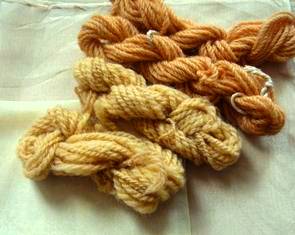 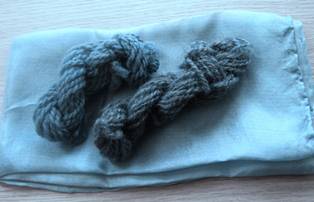 SAXON BLUE: This liquid indigo is an improved formulation of Saxon Blue, which was first created in the 18th century. It is used in exactly the same way as the other liquid dyes, so there is no need to prepare a vat using stock solutions or reducing agents and the blue liquid can be added to other dye baths, so for example green can be produced by adding some Saxon Blue liquid to a yellow dye bath. All the samples shown are unmordanted and the skein on the right shows the effect of the dye on grey wool. 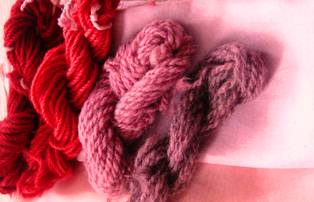 MADDER: The two wool skeins on the left were mordanted with alum and the two skeins on the right were unmordanted. The skein on the extreme right shows the effect on grey wool. The skeins are shown on unmordanted silk fabric dyed in the exhaust dye bath.

As the photos indicate, the colours from these dyes are lovely and there is considerable potential from just these few dyes for creating further colours by varying the strength of the solution and by over-dyeing or colour mixing. If the Saxon Blue liquid extract lives up to expectations, it should make many compound colours so much easier to achieve.  I feel very enthusiastic about these new liquid extract dyes and look forward to experimenting further with them.

My thanks for all your support, which I really appreciate and value.  I am continuing to work on my new book but I will try to write posts more regularly in 2013. 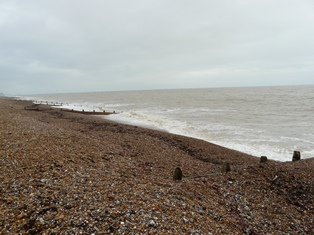 The beach near Worthing in West Sussex in winter 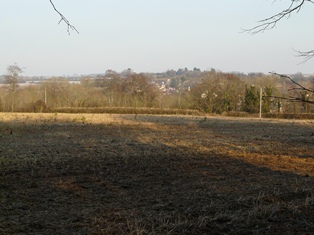 Looking towards Findon village on a winter’s morning