It is a long time since I last posted but I have been out of action for several months following a further hip dislocation and then hip revision surgery. I am now beginning to regain some mobility and my first real trip out was a visit to Findon Sheep Fair 2014 on 13th September.

I have already written a post about the Findon Sheep Fair that takes place every year in our little village here in West Sussex. The sheep fair has been here since the 13th century and even took place without sheep for a few years when we had foot and mouth disease in the UK . Although sheep have not been bought and sold at the fair for many years, the number and variety of breeds of sheep being shown at the fair is gradually increasing, with 140 pens of sheep this year.

There is now a fleece tent where the prize-winning fleeces are displayed and where fleeces can be bought by handspinners like myself . This year I bought three fleeces: a prizewinning Coloured Ryeland (lovely greys and browns), a Badger-faced Woodland (white with a fairly long staple) which was unfortunately too late to be entered in the fleece competition and one very local prizewinning Southdown fleece from the Nepcote Flock owned by a group of Findon villagers. Indeed, while I was demonstrating spinning on my wheel a little girl came along and mentioned she helped to look after sheep locally and it turned out that I had bought a fleece from one of the sheep in “her” flock. She was delighted to discover this and I gave her my email and phone number and suggested she might like to contact me and come along when I start to use “her” fleece.

This year’s sheep fair also provided an opportunity for Louise Spong of South Downs Yarn to showcase the yarns processed from Sussex Southdown sheep from David Burden’s flock near Petworth. (See my previous post “South Downs Yarn”) I will be writing more soon about these yarns, as I am working with Louise to build up some “limited edition” naturally-dyed Southdown yarns and also some knitting kits. 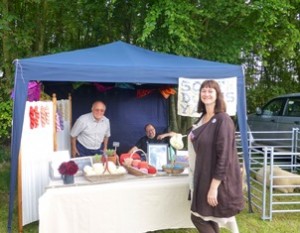 Louise Spong and David Burden (both standing, with Andrew Spong in the background) at the South Downs Yarn stand at the sheep fair 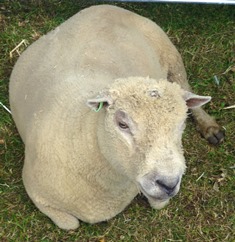 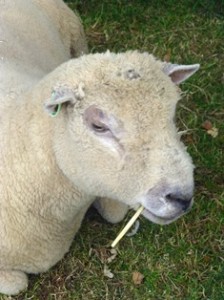