A few weeks ago I received an email asking about sources of natural dyes in Chile. The writer, Marianne Meier, works with a group of Chilean women who keep sheep but who have been throwing away the fleece, rather than making use of it. 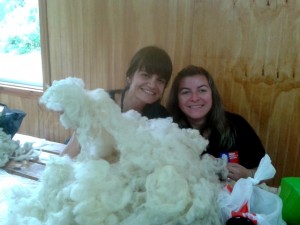 Marianne has taught the group how to use the fleece to make felt and, rather than using chemical dyes, she is starting to teach them how to use plants to dye the felt and the fleece. The photos below show the ladies in the group with some of the felt they have made and testing some plants for dye potential. 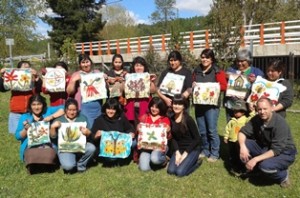 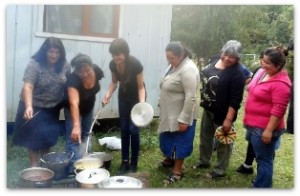 The group is based in Valdivia, which has an oceanic climate and where the summer temperature can exceed 30C and the maximum winter temperature is 10C. The region also has abundant rainfall throughout the year. The natural vegetation is the Valdivian temperate rainforest. 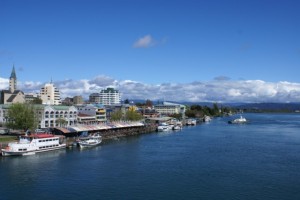 I think Marianne would like to use plants that the ladies in her group could gather locally if possible. Cochineal doesn’t seem to be available but I wonder whether it might be possible for her ladies to find species of Relbunium, which is the source of madder reds in parts of South America. I suggested dahlias, which are native to some areas of South America, particularly Mexico, and the group has tried dahlia flowers with some success. I also suggested that the ladies could save the skins from any onions they use, as onion skins could provide a useful and cheap source of colour. 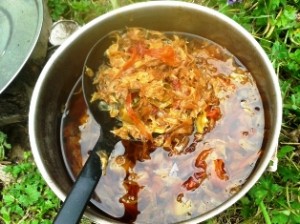 The photo above shows the preparation of the dahlia dye bath.

I have urged Marianne to try and obtain a copy of Ana Roquero’s book Tintes e Tintereros de America, which has detailed information about South American dyeing traditions and photos of South American dye plants. Otherwise, I don’t feel be able to give the group much more information, other than that which applies to most plants from which one wishes to extract colour.

I wonder whether any readers have experience of  using plants for dyeing in Chile or other regions of South America with similar climatic conditions and might be able to suggest which plants to test for their dye potential? If so, Marianne and her group would be thrilled if you would be willing to share your knowledge, perhaps by contacting me through this website?

If anyone has any information or suggestions to offer, Marianne and her group would be most grateful.