Blog - Latest News
You are here: Home1 / Diary & News2 / Another one-year course starts at Ditchling Museum of Art and Craft

In late September the second one-year natural dyeing course started at Ditchling Museum of Art and Craft. This year I have two assistants, Ross Belton and Zuzana Krskovo, who were both students on the course last year, and I am very grateful for their assistance and support as, without them, I would not be physically able to lead the course.

I was thrilled to meet my new students and I am sure I will enjoy working with such a talented and enthusiastic group of people, who again represent a wide range of creative disciplines. The talent of these students became apparent as soon as they introduced themselves and showed examples of their work.

Although it was not the ideal way to start the course, the first session was devoted to dyeing with fresh woad leaves and fresh Japanese indigo leaves. I decided to start with these dyes, as the course will finish next year before the woad is ready to harvest for dyeing and I didn’t want to miss the opportunity to use fresh leaves with the students. As there was enough Japanese indigo growing in the museum dye garden, it seemed sensible to use some of that too.

Although it seemed as if the rain had set in for the day, in the afternoon there was enough sunshine for us to be able to work outside and to have a look round the dye garden. We also harvested some flowers for solar dye pots.

We made a hydrosulphite vat with the fresh woad leaves and then used the same leaves for a simmered dye bath to achieve browns and pinks. 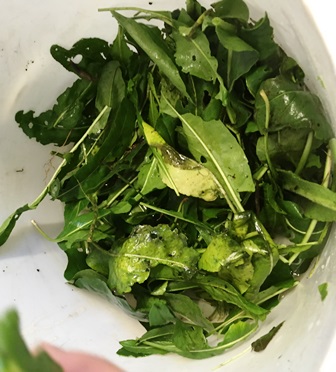 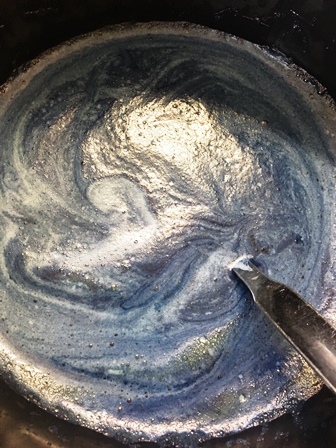 We used the Japanese indigo leaves following the vinegar method. (Recipes for these two methods are in my books and also in earlier blog posts.)

Usually I start my courses with a general introduction to natural dyeing and then we dye with three substantive dyes to illustrate the methods used. However, this year the full introduction will not come until the second session and I was very impressed with the way the students coped with so many new techniques with very little general background information.

This photo, taken by Zuzana Krskova, shows the woad and Japanese indigo results. 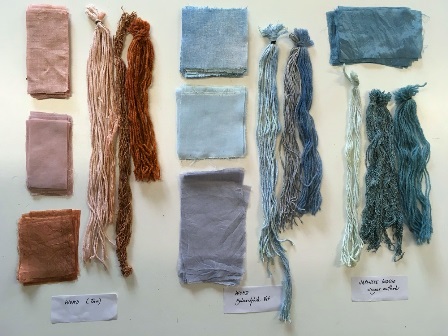 From left: woad leaves simmered, woad leaves hydrosulphite vat, Japanese indigo leaves vinegar method. For all samples the fabrics are from the top linen, cotton, silk and the fibres are from the left cotton, linen, silk, wool

The photo below, taken by Fiona Eastwood, shows the solar dye pots with some results. These will be shown more clearly in my next post, when the samples have been sorted properly. 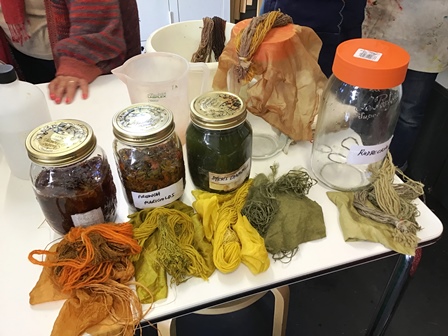 The photo below shows student Fergus Drennan (Fergus the Forager) holding a bracket fungus found on his travels. It was identified as Phaeolus schweinitzii or dyer’s mazegill and will be used for dye colour in due course. (Photo by Kendall Clarke) 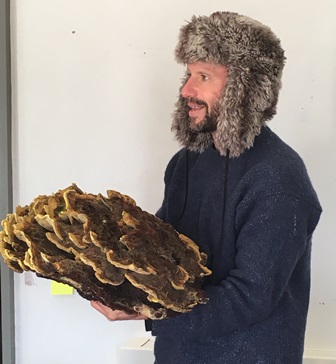 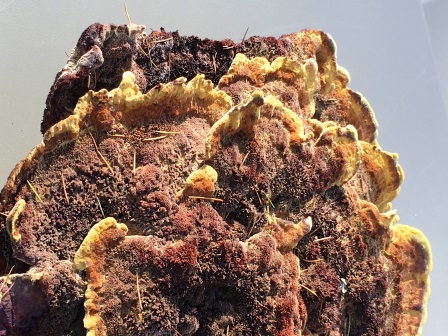 Close up view of the bracket fungus (Photo by Kendall Clarke)