Unfortunately I’ve been seriously ill in hospital again, so the August session at Ditchling Museum was cancelled and we used the September session to harvest and use the woad and Japanese indigo (Persicaria tinctoria) before it was too late in the season. At this session we also used Saxon Blue.

After we had used the woad and Japanese indigo leaves for blue, we simmered the same leaves to make a dye bath for tans.

One of the students brought some woad leaves, which were chopped and then we poured boiling water over them and left them to steep for about an hour. Then the liquid was then strained off  and the leaves squeezed well to extract all the dye potential.When the liquid had cooled to 50C, soda ash was added to turn the liquid from brown to green and the liquid was whisked until the froth became blue and then whisked further until it started to turn white again. We allowed the froth to subside and then added a reducing agent, sodium hydrosulphite, to remove the oxygen. When the liquid below the surface had become greeny yellow, the vat was ready to use.

NOTE: As woad is said to prefer soft water, it is a good idea to use rain water for woad vats. However, I rarely remember this and have always found the ordinary water from my tap produces a perfectly good woad vat. I have also read that the dye solution should be cooled quickly to 50C, so some people put the container of woad solution into a second container of cold water and sometimes add ice cubes to speed up the cooling process. This is not something I tend to do and my woad vats are always fine but they might be even better if I remembered to cool them down quickly. 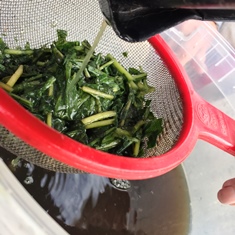 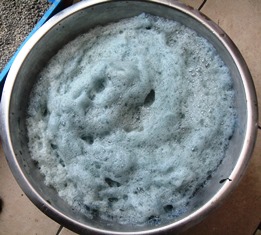 Blue froth forming as the liquid is whisked 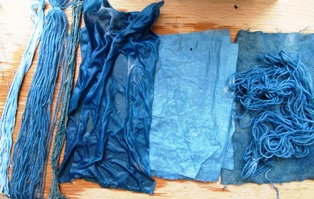 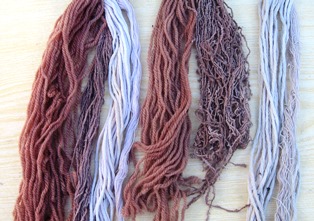 My Japanese indigo had already started to form seed, so the blue dye potential was reduced and the results were rather disappointing. Luckily, one of the students brought some of her own Japanese indigo leaves and we tried two methods – the usual vat method and the water and vinegar method.

In the vat method the Japanese indigo leaves are torn or cut up into small pieces, covered with cool to warm water and brought to simmering point over a period of about 1 to 2 hours. (Note that this differs from the woad method in that boiling water is not poured over the leaves, but they are first covered with cool to warm water and then heated gradually.) The leaves are then left to steep in the hot water for about an hour. Then the liquid is strained off  and the leaves are squeezed well to extract all the dye potential. When the liquid has cooled to 50C, the dye vat is then made in the same way as described above for woad. 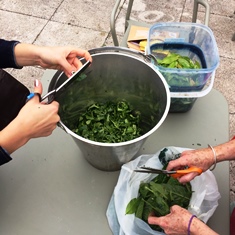 Cutting up the Japanese indigo leaves 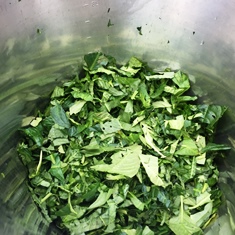 The water and vinegar method requires at least 200% fresh leaves and this method gives blues which may be less stable or permanent that the blues from the more traditional methods of dyeing with woad/indigo. However, this method requires only water and clear 5% vinegar. The vinegar should be added at the rate of about 15mls clear vinegar per litre of water. Harvest the leaves and process them immediately. Chop or cut up the leaves as finely as possible, preferably not using a wooden chopping board, as this may absorb too much of the precious dye solution, or process them with a little water in a liquidiser. Put the chopped leaves into a container and add enough water to cover them. Then add the vinegar and knead the leaves very well for at least 5 minutes until the liquid is bright green. Strain off the liquid and set it aside. Knead the leaves again in water and vinegar as before, strain off this liquid and add it to the liquid reserved from the first kneading process. Immerse the fibres immediately in the liquid and leave them to soak for about one hour. Then rinse them in clear water and air them. Finally, add a small amount of fibres to the liquid and leave them overnight to exhaust any remaining dye potential, then rinse and air them.

NOTE: I have read that some dyers use iced water without the addition of vinegar but I have not tried this. 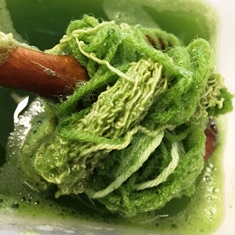 Saxon blue or sulphonated indigo is an indigo extract made by dissolving indigo powder in sulphuric acid. The process was discovered around 1740. It is called Saxon Blue because the blues it produced resembled the blues of ceramic wares based on cobalt and Saxony was the centre of that industry.

Saxon Blue is used mainly for dyeing wool and silk and produces blues with a turquoise tone. Blues from Saxon Blue may be less fast to light and washing than indigo blues made by the vat method and deep blues from Saxon Blue have higher levels of fastness than paler shades. There is some disagreement about whether an alum mordant is needed for Saxon Blue. I tend to prefer to use an alum mordant, as this seems to produce deeper, clearer blues.

Saxon Blue is simple to use. Prepare the hot water for the dye bath and then just stir in some Saxon Blue liquid. How much one needs to use depends on the depth of blue required and the amount of fibre being dyed. I usually start with one or two teaspoons and then add more if necessary. Then add the fibres, bring the dye liquid up to simmering point and simmer gently for 30 to 45 minutes. Then leave to cool before rinsing.

The Saxon Blue we used was bought from Fiery Felts (see link under Useful Websites) and made by Helen Melvin. This gives excellent blues and a little goes a long way. 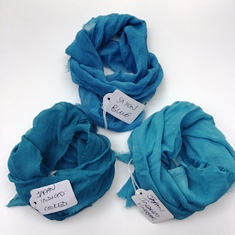