Recently I read a post on India Flint’s blog (prophet-of-bloom.blogspot.com), in which India suggested using her method for dyeing with frozen flowers as a way of extracting colour from the leaves of indigo-bearing plants. So I decided to try this method with the last few remaining woad leaves in my dye garden.

I managed to collect just about enough leaves for a small trial dye bath and as soon as I had harvested them, I put them into a sealed plastic bag and left them in the freezer for about 24 hours. I then removed the leaves from the freezer and squeezed the bag to crush them before removing them from the bag. I then immersed the leaves in a bowl of lukewarm water. Out of interest I checked the pH of the dye liquid and it was pH7 (neutral). I added some silk and wool fibres, squeezed them with the leaves for a few minutes and then left them to soak for about half an hour. After this time the fibres looked blue. I then left the samples to soak for several more hours, after which they had become a grey/blue. I removed this first set of fibres and added soda ash to the dye bath to make it alkaline (about pH9).  I added a wool skein to this alkaline liquid and left it to soak for several hours. This sample became tan/pink.

The results can be seen in the photos below. (Note: The actual blue colours are rather greyer in tone than they appear in the photo.) The blue/grey colours are shades that are sometimes obtained from an almost exhausted woad vat and are also similar to those I often achieve from frozen purple flowers, such as pansies, using the same freezing and dyeing method. However, I was able to harvest only a few leaves for this experiment, so I intend to try it again next year earlier in the growing season and see whether a higher percentage of younger leaves gives different results. I will also try removing the fibres as soon as they have become a reasonable blue, rather than leaving them in the dye bath for a longer period, as it seems possible that prolonged soaking caused the blue colour to become greyer in tone.

The pink/tan colour is similar to the shades obtained from woad leaves if they are simmered to make a dye bath.

Although this method may not necessarily produce true indigo blues, it is certainly a useful way of using woad leaves and I am grateful to India for suggesting it. However, without experimenting further and conducting fastness tests, I cannot be sure that the colours achieved from woad leaves by this method would be as fast as those achieved by the more conventional methods. 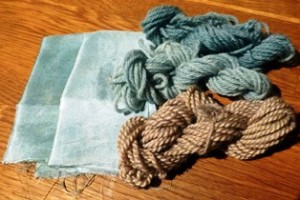