In the third session of the one-year course at Ditchling Museum we concentrated on tannin-rich materials and their use as dyes and mordants and to create black with iron.

The three tannin-rich dyes we chose were all barks: elm bark, birch bark and cherry bark. For the tannin mordant we used oak galls and we tried two methods of creating black with ferrous sulphate and tannin from plants. We also sampled oak galls as a dye.

A tannin mordant is most commonly used on vegetable fibres, either alone or as part of the alum mordanting process when using alum sulphate or aluminium from symplocos leaves. Tannin is also used as a component in a dyeing method for animal fibres with some dyes and this method will feature in a later session.

Black can be achieved by a combination of tannin and iron but over time this method can damage fibres, especially wool, as it requires 25% iron (ferrous sulphate). There are many sources of tannin that can be used with iron to create black and we used oak galls in one method and alder bark and twigs in the other. When dyeing black using the tannin/iron complex the fibres must be alternately dyed then aired, in order for the depth of colour to develop. Exposure to the air is an important part of the process.

As I had anticipated, the barks gave very little colour on the vegetable fibres. We might have achieved stronger colours on all the fibres if we had been able to test the barks over a longer period of time. However, as we decided to to complete the processes within the time available on the day of the session, we followed the usual method of simmering the barks to extract the colour. The only difference from the usual method was that we added the wetted fibres and the bark to the dye pot at the same time, rather than simmering the barks first to extract the colour. This meant that the fibres were in the dye pot for longer than is the case if the colour is extracted first.

My preferred method of dyeing with tree barks is as follows: pour very hot water over the bark pieces and leave to soak for at least 24 hours – the longer the soak, the better. Then start to apply heat and simmer the bark for about an hour. Leave to cool and soak for a further 12 to 24 hours, simmer again for about 30 minutes then strain off the dye solution and add the fibres. Simmer the fibres in the dye bath for about one hour then leave to cool. In the meantime, the bark can be simmered again to extract more dye colour, which can be added to the first dye bath or used to make a second dye bath. 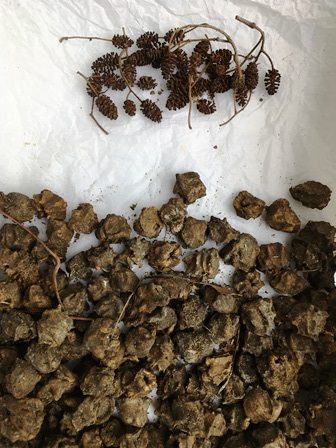 Knopper galls develop as a chemically induced distortion of growing acorns on pedunculate oak trees (Quercus robur), caused by the Andricus quercuscalicis gall wasp, which lays eggs in buds. (The name Knopper comes from the German word Knoppe, which is the name of a kind of helmet, and indeed it is as though the acorn has had a kind of helmet put on it.) 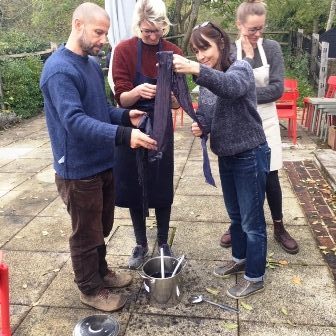 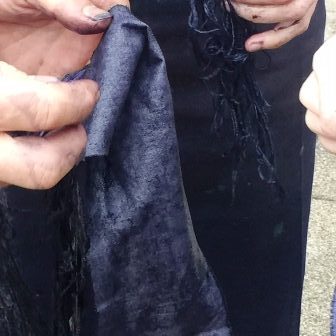 Note: further simmering and airing should eventually give blacks with these tannin/iron recipes. 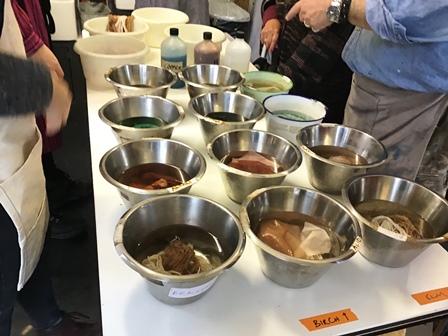 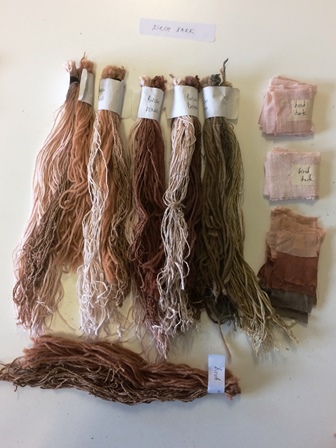 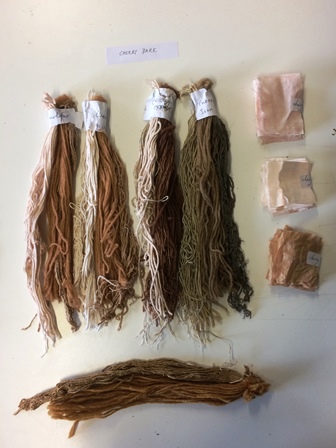 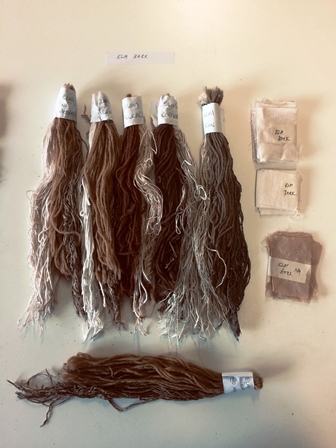 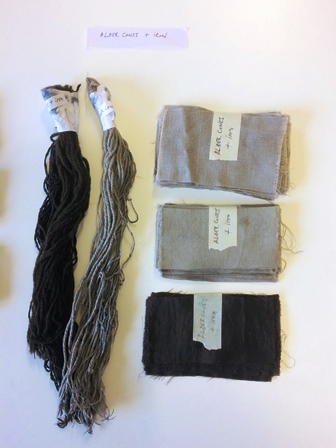 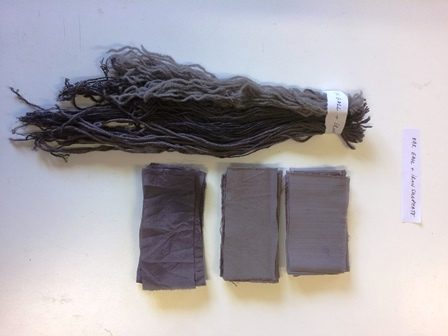