Last month I taught a one-day workshop at Ditchling Museum of Art and Craft, with Ross Belton as my assistant.

At the workshop we followed some of Ethel Mairet’s recipes from her book “Vegetable Dyes”. However, we mordanted using 15% alum instead of the 25% alum used by Ethel Mairet. Using such an unneccessarily high percentage of alum can make wool sticky and doesn’t improve the depth of colour or increase fastness.

“Although the dye book contains innumerable recipes, the dyes most in use at Gospels were the imported indigo, madder and cochineal, and the British plants weld, bracken and crotal. These were capable of being treated by different mordants or of being overdyed with other colours, but most often the colours were used in their pure hues.”  From “Ethel Mairet – A Weaver’s Life” Margot Coatts 1983 Crafts Study Centre Bath

We dyed with weld, madder, bracken and Saxon blue and used the following recipes:

Madder consists of the ground-up dried roots of a plant Rubia tinctorum, cultivated in France, Holland, and other parts of Europe, as well as in India. Madder is one of the best and fastest dyes. It is also used in combination with other dyes to produce compound colours. The gradual raising of the temperature of the dye bath is essential in order to develop the full colouring power of madder; long boiling should be avoided, as it dulls the colour. If the water is deficient in lime, brighter shades are got by adding a little ground chalk to the dye bath, 1 to 2 per cent.

Madder is difficult to dye as it easily rubs off and the following points should be noted.

Mordant with ¼ lb Alum to the pound of wool. Boil for 1 hour, let cool in mordant, wring out and put away in bag for 3 or 4 days. Wash very thoroughly. Then dye with 5 to 8ozs madder according to depth of colour required, and a handful of bran for every pound of wool. Enter in cool bath and bring slowly to the boil in an hour or more. Boil for a few minutes.

Or: “If used for darkening colours, copperas (iron) is added to the dye bath, and the boiling continued for 15 to 20 minutes.”

Notes written in pencil by Ethel Mairet inside the front cover of her own copy of “Vegetable Dyes”:

Madder must be fresh. Chalk essential for madder dye bath.

Weld, Reseda luteola is an annual plant growing in waste places. The whole plant is used for dyeing except the root. It is the best and fastest of the yellow natural dyes. The plant is gathered in June and July, it is then carefully dried in the shade and tied up in bundles. When needed for dyeing it is broken into pieces or chopped finely, the roots being discarded, and a decoction is made by boiling it up in water for about ¾ hour. It gives a bright yellow with alum and tartar as mordant……………8 percent of alum is often used for mordant for weld. A little chalk added to the dye bath makes the colour more intense; common salt makes the colour richer and deeper.

Mordant with alum, and dye with 1 lb of weld for every pound of wool. Common salt deepens the colour. If alum is added to the dye bath, the colour becomes paler and more lively. Sulphate of iron inclines it to brown.

Indigo is the blue matter extracted from a plant Indigofera tinctoria and other species growing in Asia, South America and Egypt. It reaches the market in a fine powder, which is insoluble in water. There are two ways of dyeing with Indigo. It may be dissolved in sulphuric acid or oil of vitriol, thereby making an indigo extract. This process was discovered in 1740. It gives good blue colours but is not very permanent, darker colours are more so than the paler. It does not dye cotton or linen.

Mordant 25% alum. Stir 2 to 3ozs Indigo extract into the water of dye bath. The amount is determined by the depth of shade required. When warm, enter the wool and bring slowly to boiling point (about ½ an hour) and continue boiling for another ½ hour. By keeping it below boiling point while dyeing, better colours are got, but it is apt to be uneven. Boiling levels the colour but makes the shade greener. This is corrected by adding to the dye bath a little logwood, 10 to 20 per cent which should be boiled up separately, strained and put in bath before the wool is entered; too much logwood dims the colour. Instead of logwood a little madder is sometimes used; also Cudbear or Barwood.

JD Note: Extract of indigo, also called Saxon Blue, is a mixture of oil of vitriol (sulphuric acid), precipitated chalk and finely ground indigo. It can be purchased ready made from Fiery Felts or DTCrafts. At this workshop we used Saxon Blue made by Helen Melvin of Fiery felts.

Green results from the mixing of blue and yellow in varying proportions according to the shade of colour required. Every dyer has his particular yellow weed with which he greens his blue dyed stuff. But the best greens are undoubtedly got from weld and fustic.

The wool is first dyed in the blue vat; then washed and dried; then after mordanting, dyed in the yellow bath. This method is not arbitrary as some dyers consider a better green is got by first dyeing it yellow before the blue. But the first method produces the fastest and brightest greens as the aluming after the blue vat clears the wool of the loose particles of indigo and seems to fix the colour.

The wool can be dyed blue for green in three different ways;- 1st in the Indigo vat, 2nd with Indigo Extract with Alum mordant, 3rd with logwood with Chrome mordant. For a good bright green, dye the wool a rather light blue, then wash and dry; Mordant with alum, green it with a good yellow dye, such as weld or fustic, varying the proportion of each according to the shade of green required. Heather tips, dyer’s broom, dock roots, poplar leaves, saw wort are also good yellows for dyeing green. If Indigo Extract is used for the blue, fustic is the best yellow for greening, its colour is less affected by the sulphuric acid than other yellows.

Mordant 1lb wool with 4ozs alum and 1/2oz cream of tartar. Dye blue with sufficiency of indigo extract, wash and dry. Prepare a dye bath with weld which has been previously chopped up and boiled. Enter wool and boil for half an hour or more.

Below are the results on wool skeins 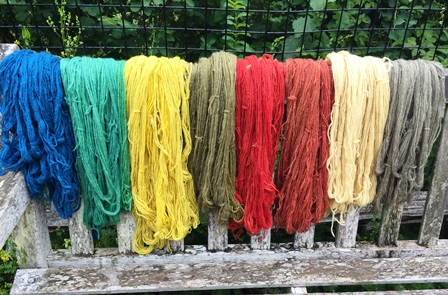 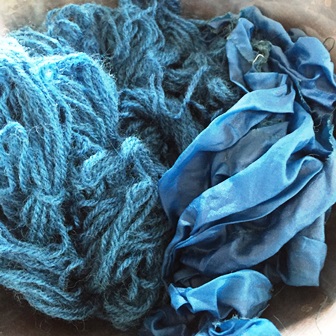 Results from Saxon Blue on wool, cotton and silk