The first session of this one-year course was on March 18th and I was delighted when I met the 12 students we had selected. The range of skills they represent include weaving, bookbinding, papermaking, basketmaking, costume designing, feltmaking and several other art and craft practices. Their interest and enthusiasm, together with their searching, intelligent questions make the group both a joy and a challenge to work with.

At this first session, after the students had talked a little about themselves and their creative practices, I gave a general introduction to the history of natural dyeing and the most significant dyestuffs and outlined the contents of the course and some of the techniques we would be covering. I also explained the difference between dyes and stains and emphasised the importance of selecting dyes with good levels of fastness, especially if producing articles for sale. We then set up some mordant baths using aluminium potassium sulphate for the protein (animal) fibres and aluminium acetate for the cellulose (vegetable) fibres. We also used tannin as a mordant and at the May session we will embark on mordanting using aluminium from symplocos leaves (see my earlier post on symplocos) and preparing wool and silk fibres with rhubarb leaf base.

The first dye we used was buckthorn bark. This might have been alder buckthorn (Frangula alnus) or common buckthorn (Rhamnus cathartica) but, as the label merely stated buckthorn bark, I couldn’t be sure which it was. Both give similar, if not identical, colours, so it didn’t really matter. (Note to suppliers: It would be very helpful to have the botanical names on the packets for accurate identification.)

We used wool, silk, cotton and linen yarns and pieces of silk, cotton and linen fabric and, as buckthorn bark is a substantive dye, we didn’t use a mordant. After dyeing, the samples were modified using 4 modifiers: an acidic modifier (clear vinegar), an alkaline modifier (soda ash), and copper and iron modifiers. Two sets of samples remained unmodified, one for purposes of comparison and the other to be over-dyed with indigo at a later date. This method of sampling will be used for all the dyes we test, with a few variations for specific dyes.

The photos below show some of processes and the results. 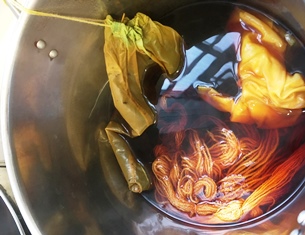 Wool and silk samples in the buckthorn bark dye pot 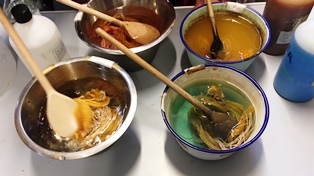 The above 2 photos courtesy of Susan D’souza 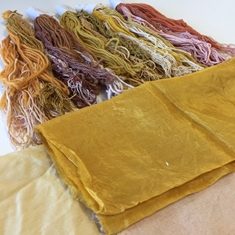 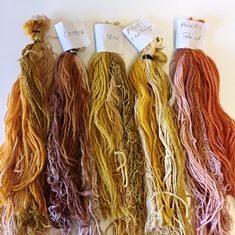 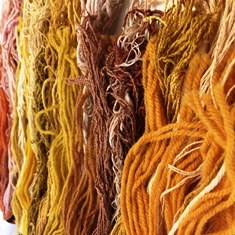 Close-up of some buckthorn bark samples 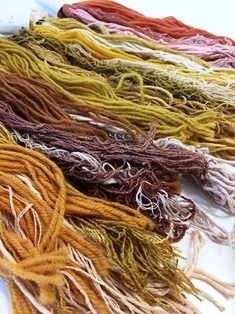 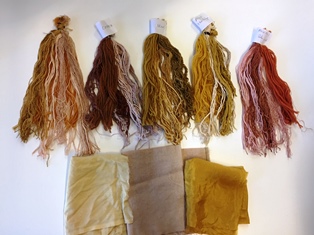 The above 5 photos courtesy of Ross Belton

Note: I am extremely limited in what I am able to manage physically and this course would not be possible without the support of my wonderful assistant, Deborah Barker. I am so grateful to her for all her help in making everything run smoothly.