One of the sessions on the one-year course at Ditchling Museum was devoted to resist dyeing techniques, specifically to cassava paste resist, used traditionally in Nigeria, and Dhabu or mud resist, used in India. For the cassava paste resist the students either applied the paste to the fabric with a brush or used zinc or tin stencils from Nigeria, which I have as part of my textile collection. The mud resist paste was applied to the fabric either with a brush or using carved wooden blocks.

The mud resist paste was bought from Saith Ffynnon Wildlife Plants (link on home page) and came supplied as a dry mixture for combining with water.

The following notes are from the information sheets I prepared for the students.

Resist Paste Clay from India (Dhabu) – use according to instructions supplied with paste. Pastes from rice flour & cassava flour can also be used. (Cassava flour paste is used in Nigerian indigo dyeing.)

This is traditionally used as a resist in Nigerian Adire  indigo dyeing. The Adire is either produced by free-hand painting of cassava paste, Lafun, onto the cloth or by stencilling the starch on fabric. The stencils are made from corrugated zinc or a perforated tin sheet.

The extract below is from the reference above. My interpretation follows.

“For every 1kg of flour of any type used in the study, 4 litres of water or more was used for the preparation. Some of the flour was prepared under hot condition and stirred on fire for a quarter of an hour as prescribed by Wolff (1985); that long stirring of paste prevents lumps. For the innovation, not all the paste was able to stand long stirring on fire as prescribed. For example, the cassava flour and starch prepared on fire for less than 10 minutes became too elastic and tough to manage. It could not be forced through the mesh for the screen printing application and for the stencil; it was too heavy thereby breaking the linoleum carpet, plastic and even the indigenous metal stencil. For cassava flour and starch, the paste was prepared with hot boiling water but not on fire. The cassava starch powder was melted in ½ a litre of cold water before 3½ litres of boiling water was poured and stirred to form the paste. After stirring, the paste was shared into ¼ kg in different bowls and mordant (caustic soda) which was considered most appropriate in this study was administered. Normally among the young producers today, 2 tablespoons full of caustic soda is the practice for 1 regular plastic measure of flour (Ike ijoba), but in this study for proper documentation and standardized measurement of the chemical for studio practise and general production, the study shared the paste into manageable quantity. In every ¼ kg, the two identified activators were administered. Alum was turned into crystal to carry same texture with caustic soda, one levelled table spoon full of each were administered in different bowl of the prepared paste, while in another, one and half and the final one, two levelled table spoons.”

My interpretation of this:

Use 4 litres of water to 1kg cassava flour. For 125gms flour use 500mls water. Carefully blend the flour first in 100mls cool water. Bring the remaining 400mls of the water to boiling point and then gradually stir it into the flour mixture, stirring constantly to create a smooth paste. If desired, add about a teaspoon of alum sulphate, first dissolved in some of the boiling water. (I’m not sure why this is traditionally added. In some cases copper sulphate (called “blue alum”) is also added, probably as a preservative. I usually omit both alum and copper sulphate.) If necessary, strain the mixture through a sieve to make sure it is free of lumps. Note: I have no idea why the caustic soda would be added; it is certainly not a mordant. When I attended a course with a Nigerian dyer she added alum and “blue alum” (copper sulphate) to the cassava paste solution but was unable to tell me why she did this. 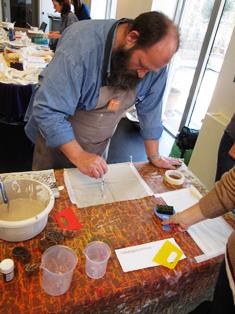 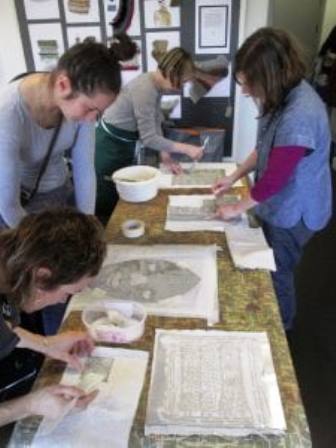 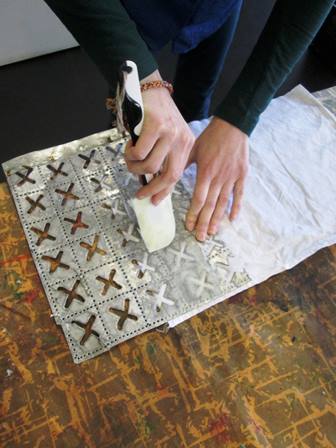 Close up of one of the metal stencils 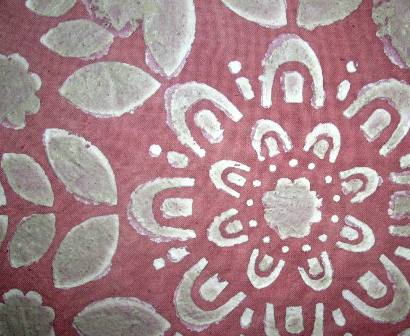 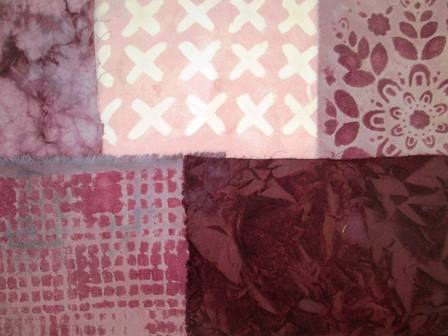 All photos by Helen Gibbs