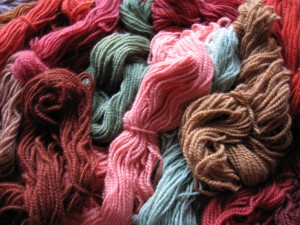 With the exception of the pale pink skein (dyed in cochineal on an alum mordant) & the pale blue skein (dyed in indigo), this photo shows some colours achieved from various dyes, using rhubarb leaves as a base or alternative mordant. The reddish colours are from madder, the pinker shades are from cochineal, the brown & tan colours are from cutch & the greeny-blue shades are from indigo. The wool skeins were first treated in the rhubarb leaf solution, then dyed. No other mordant was used.

Following a comment on my latest entry on Rhubarb Root, I thought it might be useful to clarify the difference between rhubarb leaves & rhubarb root. Rhubarb root is a very useful dyestuff, more suitable for animal, rather than vegetable, fibres, & it can be used both with or without a mordant. Used with colour modifiers, it gives shades ranging from yellow & rust to pink, red-brown & green. It doesn’t seem to matter what species of rhubarb you use. I use the roots from the edible rhubarb I grow in my garden for pies etc. Some people use the roots of ornamental rhubarbs. The rhubarb root sold commercially often comes from China & is used as an ingredient in laxatives or purgatives.

Rhubarb leaves, which contain poisonous oxalic acid so should be handled with care, can also be used as a dye on mordanted or unmordanted fibres, but they tend to give only a pale yellow colour. Their main use is as an alternative mordant or base for other colours. They work well on animal fibres but are not really recommended for vegetable fibres. Rhubarb leaves are widely used as a base for other colours by Tibetan carpet weavers, working in Himalayan regions where chemical mordants are often difficult to obtain. They are also used to assist fermentation in indigo vats.

Full details for using rhubarb root & leaves can be found in my books. (See under “My Books”)