Madder (Rubia tinctorum) is one of the most ancient dyes and a particularly useful and reliable source of red. Other plants in the madder family (Rubiaceae) include the native plants lady’s bedstraw (Galium verum), wild madder (Rubia peregrina), hedge bedstraw (Galium mollugo), dyer’s woodruff (Asperula tinctoria) and woodruff (Galium odoratum).

Although madder (Rubia tinctorum) was available during the Roman period, it seems to have been replaced during the early Anglo-Saxon period by the native Rubiaceae (for example:lady’s bedstraw and wild madder). This suggests that the Romans imported madder as a dried dyestuff, rather than growing it in Britain, and that it disappeared with the departure of the Romans. There is evidence that madder began to be imported from France in the 7th century and by the later Anglo-Saxon period it had become a very common dye.

The analysis of dyes in textiles of the early Anglo-Saxon period seems to indicate that reds, like purples, were mainly used for narrow woven bands, headdresses, embroideries and accessories, such as bags, rather than for larger fabrics. Where dyes were used in larger fabrics (and dyes were detected in only one-third of the larger fabrics analysed) these were mainly dyes that give shades of yellow, blue and brown, plus green from blue and yellow dyes used in combination. It is also possible that, at least in the early Anglo-Saxon period, reds and purples were colours reserved for people of high status.

An alum mordant is necessary for true reds from madder (Rubia tinctorum) and reds achieved on a clubmoss mordant are very similar to those achieved on fibres mordanted with mineral alum. Without a mordant, madder gives colours in the orange to coral range and using a tannin mordant gives similar but slightly deeper colours. An alkaline modifier, such as wood-ash-water, makes the colours pinker in tone and an iron modifier makes the colours browner. The addition of chopped crab apples to the dyebath makes the colours brighter.

In my experience it is not easy to obtain true rich reds from lady’s bedstraw, wild madder, dyer’s woodruff and woodruff. I grew all these for several years in my old garden but never managed to get the sort of red obtained from madder, also grown in my garden. The use of an alkaline (wood-ash-water) modifier moves these colours further towards red and an iron modifier makes the colours browner. I intend to continue experimenting with these dyes in the madder family – if, that is, I can grow enough roots to make the tests worth the effort. Lady’s bedstraw grows wild at the sides of many country roads in this area but it is against the law to uproot wild plants, so I shall have to rely on my home-grown plants and it will be a while before they are mature enough to harvest. 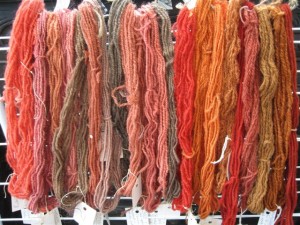 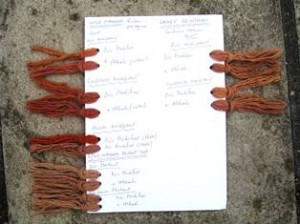 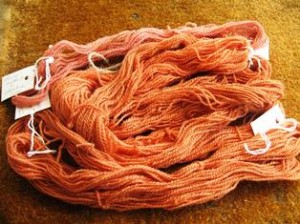