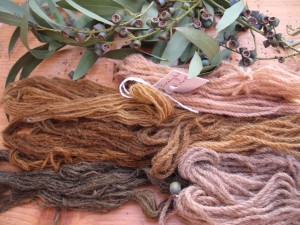 NOTE: As it’s usually the alkaline & iron modifiers that give the most interesting results, I limited these tests to these 2 modifiers only. However, I have just read that some eucalyptus dyes react better in an acidic solution, so I may have made the wrong choices.

NOTE TO SELF: Do not try to take short cuts by not testing samples across the full range of modifiers. The modifiers omitted might be the ones that give the most interesting results. 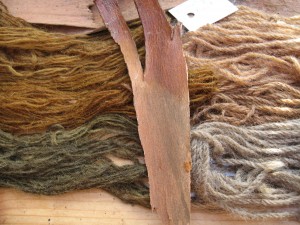 The same comments on not missing out modifiers apply here. 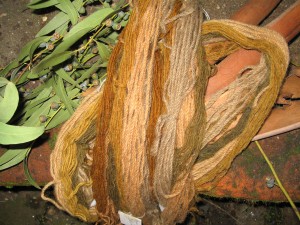 This image shows all the skeins dyed as in the photos above. Any variations in shade between the photos is because this last photo was taken outdoors, while the other 2 photos were taken indoors. I think the colours in this photo, rather than in the photos taken indoors, are closer to the actual colours of the skeins

I’m afraid I’m still working on my skills as a photographer!