Last November, a comment from handweaver Sandra Rude (www.sandrarude.blogspot.com) about her methods for using wood shavings for dyeing led me to her blog, where she has recipes for preparing and using dyebaths from wood shavings. First, she soaks the shavings in alcohol (or methylated spirits) for several weeks to extract the colour. When the liquid has developed a strong colour, she strains off the liquid then adds the fibres, plus enough water as necessary to allow the fibres to move freely in the solution. The dyebath is then heated gently (but no higher than 140F) and the fibres are left to soak until they have taken up the colour. (For further details, look at Sandra’s blog using the link above.)

This method of colour extraction is not entirely new to me, as I have used it to extract the purple colour from alkanet (Alkanna tinctoria).  It is also recommended for use with the so-called “insoluble redwoods”. These include Sanderswood (Pterocarpus santalinus), Camwood (Baphia nitida), Padauk (Pterocarpus indicus) and Barwood (Pterocarpus soyauxii). Although these dyes can be used following the usual simmering process to extract some of the colour, much colour potential remains unused, as it is not soluble in water. This means that the colours obtained may be considerably paler than those achieved using the alcohol-soak method. So I decided to try out Sandra’s method with Sanderswood and with some Walnut and Redwood (Sequoia sp.) shavings I had been sent some time ago by a woodturner. I also remembered I had some Camwood, not in the form of wood shavings but as pressed wood dust, presumably also mixed with some sort of binder. These circular discs were sold to me some years ago by a Nigerian indigo dyer, who explained that they are used by Nigerians as a facial cosmetic, or decoration, rather than as a textile dye. (My husband also recalls that the same lady told us that camwood is rubbed on babies’ skins as an antiseptic, but I must admit that I can’t remember being told this.) 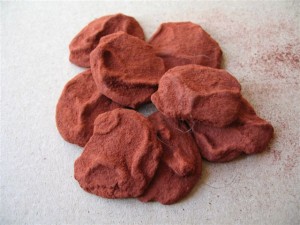 These are some discs of pressed camwood ready for crumbling up and soaking.

I started by putting a layer of shavings (or crumbled camwood discs) about 2 inches deep in the bottom of a glass jar & then I covered them with methylated spirits. I did this with each of the dyes I wanted to test. I then put the lids tightly on the jars and left the shavings to steep for several weeks until the liquid became strongly coloured. Incidentally, although meths is purple in colour, this purple doesn’t seem to affect the final dye colour. In addition to the dyes I tested, I also steeped shavings of birch in the same way but, as the liquid showed little evidence of colour change, there seemed no point in continuing with them any further. 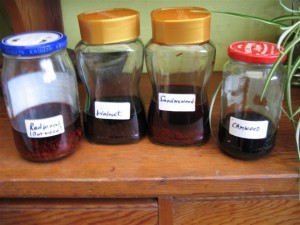 Here the dyestuffs are soaking in the methylated spirits and a considerable amount of colour has already been extracted. (Note: If you can read the labels, ignore the word “Barwood” under “Redwood” on the left hand jar, as it’s an error on my part!)

The liquid is then strained off into a dyepot, together with more water as necessary, and the fibres are added.

Do not throw away the meths-soaked wood shavings as they need to be disposed of with care. Return them to their jars in the meantime. Details for disposing of the woodshavings and the used dyebaths are given  below.

The crucial thing to bear in mind is that alcohol/methylated spirits is highly flammable & can easily catch fire near a naked flame. So the dyebath should not be heated on a stove with a naked flame, such as gas or coal or wood, but only on an electric heater. If in any doubt, allow the materials to soak in the dyebath without applying heat 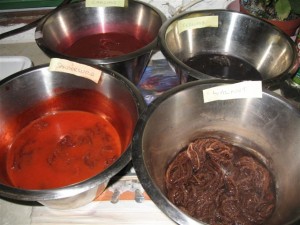 I was delighted with the results of the dyebaths made from camwood and sanderswood, as these produced really vivid reds not obtainable from the usual simmering method of colour extraction. However, the results from the other two dyebaths were less spectacular. The colours from the walnut shavings were even paler than those I achieved from similar walnut shavings using the usual method of colour extraction. The redwood which, according to the woodturner who supplied it, came from Sequoia sp., gave a rich red colour when soaked in meths but the dyebath produced greenish shades identical to those obtained from the redwood shavings using the usual dyeing method. 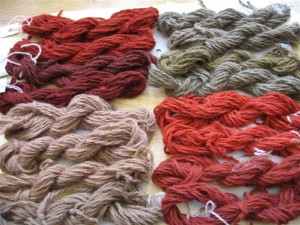 It is interesting that, with this method of colour extraction, the modifiers seem to make less difference in shade than I would have expected.

Although this method of colour extraction using alcohol/methylated spirits can produce really strong, bright colours with some wood shavings, there are several disadvantages to this method of dyeing. Firstly, the smell of the dyebath is very unpleasant if one uses methylated spirits, although the fumes do disappear after a while. Secondly, I found the methylated spirits left the wool fibres feeling a little harsh to the touch. Disposal of the used dyebaths may also present problems, as I would not recommend that they be poured down the drain. I poured mine on the gravel at the edge of my driveway, close to a brick wall. Disposal of the meths-soaked wood shavings might have been difficult, but my husband readily took them, still carefully stored in their glass containers, to use to start his garden fires. Otherwise, I would probably have dug a deep hole in the ground and burned them, then covered the ash with soil. Nevertheless, I was glad I did these experiments as they really illustrated very clearly the colour potential of the “insoluble redwoods” when used with the alcohol extraction method. For the first time, I was able to see some of the colours that were so popular with dyers in the past. So my thanks to Sandra Rude for suggesting these experiments to me. I think next time I will see if I can buy a bottle of cheap vodka to use instead of the meths, as I should imagine that might smell less unpleasant.

A New Dress for MillyA Useful Purchase?
Scroll to top