Now that I am aware of the potential pleasures of dyeing with fungi, I keep my eyes open for anything in the garden that may be a possible source of dye colour. I’ve been told that the darker the fungus is in colour, the more likely it is to contain useful dye pigments, so I must bear this in mind, as I don’t want to waste time or fungi by collecting indiscriminately. 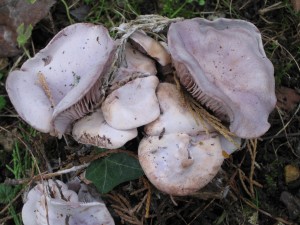 I think this mushroom, found growing under some pine trees, is Russula sardonia and I suspect that it will not be useful in the dyepot. However, as there are two largish clumps of it in the garden, I tested a small quantity and found that my suspicions had been correct. The dyebath produced only a pale beige tone on both alum-mordanted and unmordanted wool. 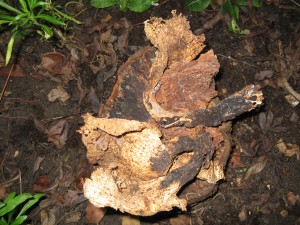 I think this is Giant Club Fungus (Clavariadelphus pistillaris). It was growing on the stump of an elm tree in our garden.  As it is brown in colour, I thought it might be worth trying it in the dyepot. 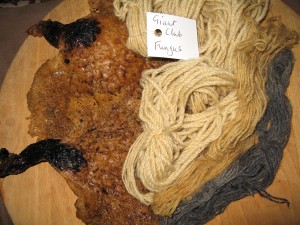 These are the results of the Giant Club Fungus dye tests.

Left to right: No mordant. alum mordant, no mordant + iron. Whilst the colours are not remarkable, the grey from the iron modifier is an attractive and useful shade. However, as this shade can easily be obtained from other sources (e.g. oak galls + iron), I shall probably not be using this fungus again for dyeing.

More Fungi PS to Fungi in the Garden
Scroll to top