I have been intending for some time to try the vinegar method of dyeing with fresh leaves from indigo-bearing plants and this year I managed to collect enough Japanese Indigo (Persicaria tinctoria) leaves to make an experimental vat. 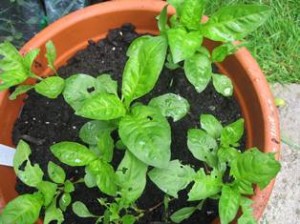 These rather pathetic-looking plants did eventually  grow sufficiently well to provide some leaves for a small test vat but still only produced enough to fill about a quarter of a small bucket.

I must admit that I have been a little sceptical about the likelihood of being able to produce fast blues  from indigo-bearing leaves using only water and vinegar and no heat.  But obviously one should always try a recipe before offering an opinion.

For this method, the leaves must be processed as soon as they have been picked and, after washing them, it is important to cut or shred the leaves very finely. (First of all, I made the mistake of using a stainless steel demiluna chopper on a wooden chopping board and as a result I wasted some of the dye potential and now have a chopping board permanently stained blue. I considered using a liquidiser but decided in the end to cut up the leaves with scissors.) Then I poured enough cold water over the leaves to cover them and added a little clear vinegar to the water – about 15mls per litre – then vigorously kneaded the leaves in the water-vinegar solution for several minutes until the liquid became bright green. I strained off this liquid into a dye pot and then made a second water-vinegar solution and repeated the process with the same leaves. I then squeezed the leaves very well before straining off this liquid and adding it to the bright green liquid in the dye pot. Then I added the wetted-out fibres and left them to soak in the liquid for about one hour until they had become blue in colour. Then I rinsed the fibres and hung them up to dry. The photo below shows the dyed wool and silk. 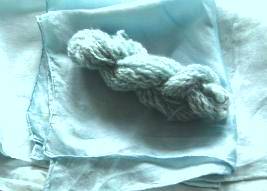 I decided to try this method with woad leaves (Isatis tinctoria) but unfortunately, as I had already harvested virtually all my woad leaves a few weeks before, all I managed to find for this experiment were about ten thin leaves left clinging to the plants.  So I wasn’t really expecting this test to be successful but these few leaves dyed the fibres a similar, but somewhat paler, blue. I would hope to get deeper blues from a larger quantity of woad leaves but sadly that will have to wait until next year.

Only time and several washes will prove whether this method gives blues which are light- and wash-fast, so I shall reserve my judgement until a later date. Certainly, if fast blues can be produced so easily and quickly, one wonders why dyers would bother with the more usual way of using fresh woad and Japanese Indigo leaves. And I suppose that thought is what made me sceptical about the merits of this method in the first place.

Back by Popular Demand!HAPPY NEW YEAR
Scroll to top