I call these experiments rather loosely "Anglo-Saxon style" because my aim has been to use only materials that would have been available during the Anglo-Saxon period, from around 450AD onwards to 1066. However, it is likely that some of the dyes and methods described here would have been used in Britain from even earlier times.

It might be useful to write briefly here about "native" plants. The Natural History Museum in London has a website which provides lists of native plants, both in Britain as a whole and also restricted locally according to postcodes. The definition of a "native" plant is "a plant that was already present before the formation of the English Channel", which separates England from the European mainland. Under this definition, woad is not classified as a native plant but it is thought that woad was probably introduced here in Neolithic times with the development of farming. Madder (Rubia tinctorum) is also not a native plant but it was probably cultivated here during the later Anglo-Saxon period. However, wild madder (Rubia peregrina) and lady's bedstraw (Galium verum) are both native plants, as are weld and dyer's broom.

The Anglo-Saxons used flax (linen) and wool from sheep in their textiles and they would have had a variety of fleece colours available so, by using fleece of different shades, some patterning of textiles could have been achieved without needing to dye fibres. As textiles decay and perish relatively quickly, there are few surviving textile fragments available for dye analysis, especially from the early Anglo-Saxon period. However, evidence also sometimes occurs in the form of plant remains in quantities and situations that indicate their possible use in dyeing. From the evidence available, the Anglo-Saxons seem to have used a limited number of dye plants and those they did use were mainly the classic traditional dyes favoured by British dyers today – madder-type plants, indigo (from woad), weld and dyer's broom, for example. These traditional dyes were certainly available during the period. As far as madder is concerned, there is evidence to suggest that madder (Rubia tinctorum) may have disappeared from use for a period of time following the departure of the Romans from Britain around 410AD. However, wild madder (Rubia peregrina) and lady's bedstraw (Galium verum) would have been available and Rubia tinctorum reappeared later in the period. This would seem to suggest that madder was imported by the Romans as a dried dyestuff, rather than being cultivated here. The Anglo-Saxons would have relied on the native madder-type plants until later, when madder (Rubia tinctorum) was imported, and there is some indication that madder was traded from France in the 7th and 8th centuries.

Other dyes used by the Anglo-Saxons include tannin-rich dyes for tan and brown shades and also for dark grey and black when used with iron. Tannins are present in many plants and in oak galls, acorns, nuts and barks. However, it is not possible to identify by dye analysis the precise source of tannin in excavated fragments. For my experiments I used both oak galls and bramble leaves & twigs as tannin mordants. I also used alder leaves and twigs, oak leaves and acorns to dye browns, and black with the addition of iron. Clearly there would have been an abundance of tannin-rich materials available in the countryside, so these shades would have been easy to produce. Another tannin-rich dye plant is walnut, which is not native but was possibly introduced by the Romans and was certainly growing here by 1000. For purples there is some evidence that lichens of the species Ochrolechia and Umbilicaria were used and when treated in stale urine, which contains ammonia, these lichens can give purples and reds of considerable beauty and brilliance, although they do not have very good light-fastness. However, purple-producing lichens are found mainly in North and West Britain, on rocky coastlines or in hilly areas, so the fact that they do not appear to have been widely used may reflect their scarcity in many areas of Anglo-Saxon England.

As far as mordants are concerned, there is some doubt as to whether Mediterranean mineral alum would have been readily available to the early Anglo-Saxons. Although the Romans would have probably brought alum for their own use, it is likely that, as with madder, it disappeared with them when they left Britain. So the Anglo-Saxons may have had to rely on alternatives until imported alum was more widely available later in the period. Even then, I suspect that dyers working in a simple domestic environment would have relied solely on what they could grow and gather locally. So what might have been used instead to fix the dye colours? Some plants, notably clubmosses, have the ability to absorb aluminium from the ground in which they grow, so it is possible that the Anglo-Saxons may have extracted aluminium from these plants. It is also possible that tannin from plants may have been used as a fixative and I have experimented with both clubmoss and tannin as alternative mordants. Iron would probably also have been used, possibly in the form of iron water or by adding scraps of iron to the dyepot. If iron pots were used as dye vessels, this may also have had an effect on the colours.

I think the Anglo-Saxons' choice of a limited number of classic dyes – madder, woad, weld and dyer's broom – is also significant, as my experiments indicate that these dyes will fix without a mordant, although in some cases the colours may be less brilliant. However, the application of an alkaline after-bath, for which I used wood-ash water, results in colours almost as bright as those achieved from an alum mordant.  Restricting one's choice of dyes to those known to be reliable and to have good fastness properties is also a common way of working for today's natural dyers, many of whom rarely use more than ten different dyes on a regular basis. Indeed, some may use even fewer and, as a wide range of colours can be achieved by applying colour modifiers and over-dyeing, limiting the number of dyes used does not necessarily also mean limiting the range of shades available. What is crucial is selecting the appropriate dyes and the Anglo-Saxons would appear to have been well aware of this.

The vessels the Anglo-Saxons may have used for dyeing are also of some interest. The earliest example in England of a madder-stained pot  (a jar made from local pottery from Canterbury in Kent) has been dated to the latter half of the 8th century and madder-stained pots were found later in several domestic sites. However, as madder was also used medicinally – to treat jaundice, for example – it is possible that these stains are the result of the medicinal use of madder, rather than of any dyeing activity. However, it is also likely that dyeing would have been carried out in pots made from some type of pottery.  It is difficult to know whether dyepots made from local pottery would have had a significant influence on dye colours and my feeling is that they probably would not have done so, especially once the pots had been used several times for the same dye colour. However, if iron pots were used for dyeing they may well have affected the colours achieved and made them duller. For my experiments I mainly used non-reactive stainless steel pots. However, I also wanted to assess the likely effect of using an iron pot and here my experiments have so far proved frustrating. Before we moved house, I possessed several pots made of iron and, foolishly assuming I would no longer need them, I disposed of them all. Since we moved I have searched in vain in second-hand shops for suitable old iron pots and the search continues. In the meantime I added some pieces of iron to some dyebaths to simulate the use of an iron pot, but I am not satisfied with the results and intend to repeat these tests when I have located a suitable pot. (I am amazed at how difficult this has been. A friend gave me a pot that unfortunately proved to have a hole in it and I bought an old iron cooking pot on ebay, only to find that it caught fire when I used it on my gas cooker. Closer inspection showed that this pot had been coated with some thick black paint-like substance, which would explain the fire.)

There is no way of knowing whether the methods I have used in these experiments would have been those used by Anglo-Saxon dyers or whether the colours I achieved replicate those achieved by earlier dyers. But I believe it is likely that dyers in the past would have worked in very similar ways to dyers today and I have based my work on the available evidence of the materials used.

The photo below shows some of the skeins dyed using the dyes and methods outlined above. I will write in more detail about individual dyes in later posts. 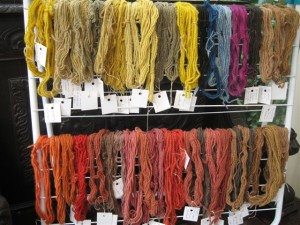