Following on from my earlier posts about Anglo-Saxon dyes, I thought I’d write a little about the dyes used in mediaeval Europe, from around the 9th century to the beginning of the 16th century.

As archaeological evidence and the technical analysis of textile fragments indicate, during this period dyers had access to a wider range of dyes as trade developed and increased. Indigo from woad (Isatis tinctoria) remained the main source of blue and madder ((Rubia tinctorum) was the most common source of reds, with kermes (Kermes vermilio) and sappanwood (Caesalpinia sappan) also being used. Weld (Reseda luteola) and dyer’s broom (Genista tinctoria) continued to be used for yellows and other sources of yellow included heather (Calluna vulgaris), bog myrtle (Myrica gale), Persian berries (Rhamnus spp.), Venetian sumac (Cotinus coggygria) and sometimes also saffron (Crocus sativus).

The Imperial or Tyrian Purple dye from shellfish, famed in the ancient world, was still being used, albeit on a much smaller scale, and some species of lichens were also used in many parts of Europe to produce a vivid, if less permanent, purple colour. The tannin/iron complex remained the most common method of creating black, although the preferred, but more costly, method was to use red, blue and yellow dyes in sequence.

There were also apparently regional differences in the use of colour. By the 11th century Flanders was known for green, the Rhineland for black and Britain for red. Within England itself, some towns were licensed during the mediaeval period to produce certain colours – for example, York for red and purple, Lincoln for green, scarlet and grey, Coventry for blue and Beverley for blue and red. 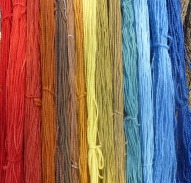 Trade flourished in the Middle Ages and the most expensive of all dyestuffs was the insect dye, kermes (Kermes vermilio), from a shield-louse that lives on the kermes oak, Quercus coccifera, found in various parts of the Mediterranean. Sappanwood, from the heartwood of the tree Caesalpinia sappan, was imported into Europe in the later Middle Ages from India, Ceylon and Java and gave red colours. The wood and the dye were known locally as “bresil” or “brasil” and when at the end of the 15th century Portugese explorers found a related tree, Caesalpinia echinata, growing in the country now known as Brazil, they named the country “terra de brasil” after the tree and the red dye from Caesalpinia echinata was called brazilwood. Sappanwood was brought into Europe in surprisingly large quantities and 80% of the reds analysed on fabrics from around 1100 to 1450 prove to have been dyed with at least some sappanwood. It was added to madder dyebaths to enhance the colour and was also used for browns and for some compound colours. Sanderswood (Pterocarpus santalinus) from India and Ceylon was also introduced in the later Middle Ages and was used for reddish rusts and compound colours.

Mediterranean alum became more widely available and was imported into Britain from Italy, Spain and Asia Minor. Italy dominated trade and Italian dyers had access to dyes that were not generally available in many other parts of Europe. The 14th century archives of  Francesco di Datini in Florence and Prato list lac (Kerria lacca), an insect dye from India and South-East Asia, and indigo (Indigofera tinctoria) from Baghdad among their items of trade.

During the Middle Ages dyeing flourished in Europe and it was the craft of the dyer that added most to the value of textile fabrics. Guilds of master dyers became established and a master dyer’s recipe book was closely guarded. The list of dyes and details of dyeing techniques found in dyers’ recipe books of the period indicate the increased complexity of some of the methods. The first known manual written for the professional dyer was the Plictho de larte de tentori, which was a collection of recipes for dyeing wool, silk, cotton and linen. It was compiled by Gioanventura Rosetti, Master of the Arsenal in Venice, and published in Venice in 1548. This manual is an important document in the history of dye chemistry and technology and clearly shows the stage of development that the dyer’s craft had reached by the middle of the 16th century.