Blog - Latest News
You are here: Home1 / The Dyer's Garden2 / Our new garden

One of the first things I have done in this new garden has been to look around to see whether there are any plants here suitable for the dyepot and I’ve already found several potentially useful plants. 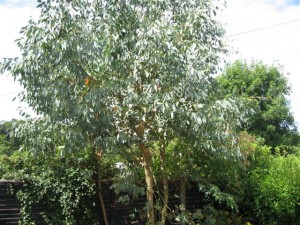 The first plant I noticed was this rather pretty eucalyptus tree in our front garden. It’s much smaller than the one in our previous garden but it’s a lovely shape. I’m planning to try – yet again – to get a really deep red from eucalyptus and perhaps this time I may be lucky. 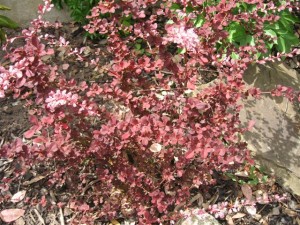 This attractive small shrub is a species of barberry, Berberis thunbergii “Harlequin”. Barberry bark is a traditional source of yellow dye and while the best dye comes from Berberis vulgaris, the more decorative varieties can also be used as a source of dye colour. 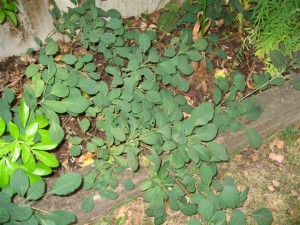 This small sprawling shrub, rather overshadowed by the Choisya bush next to it, is a Smoke Tree, Cotinus coggygria, also known as Venetian Sumac. When fully grown, these shrubs can be very beautiful and also have an interesting history. Venetian Sumac was a valued source of yellow dye in Europe in the Middle Ages and was known as Young Fustic. When fustic from the Americas was introduced into 16th century Europe, it was known as Old Fustic because its dye properties were recognised as similar to those of Young Fustic. Venetian Sumac is also rich in tannin and can be used in combination with iron to create black. 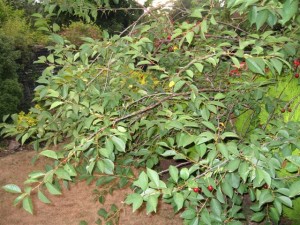 This is a small Morello Cherry tree, which has been almost stripped of cherries by the birds. (Fortunately we managed to harvest a few cherries, which we have frozen to make into jam later in the year.) The leaves and bark of cherry trees can make useful dye material, so I’ll be able to experiment with the prunings in due course.

I have decided to make two small herb beds just below the terrace area in the back garden, one on each side of the steps down onto the grass. As my definition of a herb is “a useful plant”, I intend to grow dye plants in these beds, as well as culinary and medicinal herbs.

I also plan to grow some dye plants in the raised bed next to the area where I have my indigo dye pot. At the moment this bed contains the madder and woad plants I brought with me from our old garden and some summer bedding plants for colour. Next year I’ll probably grow some more woad here, plus some more decorative dye plants, such as dyer’s chamomile.

Settling into our new homeHelp needed with identification
Scroll to top