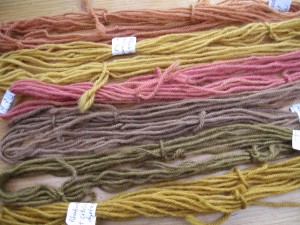 At last I’ve managed to find time to try out the colour modifiers on the rhubarb root extract dye that I wrote about earlier. The samples are on unmordanted wool.

The photo shows from top to bottom: No modifier, acidic modifier (clear vinegar), alkaline modifier (washing soda), copper modifier & iron modifier. (Note: I always put the modified samples in alphabetical order – acid, alkali, copper, iron). The last sample is from a different dyebath, made by adding an acid (this time citric acid granules, but clear vinegar would have been equally good) to the dyebath before dyeing. I added enough to turn the dyebath yellow, rather than rust, in colour. However, take care not to add too much or the colour may be too pale, so add it gradually.The unmordanted sample was then added & simmered for about 20 minutes. This latter method is a useful way of getting a clear yellow from rhubarb root, in either extract or plant form, without having to use an acidic modifer afterwards. If you dye several skeins in the acidified dyebath, they can be modified as usual, although little change occurs from an acidic modifier.

I was delighted with these results, as rhubarb root is such a useful, versatile dye, especially as it can be used without a mordant. It was good to know that the modifiers are effective when used with the dye in extract form.