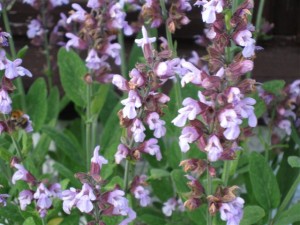 Sage flowering in my garden, with a welcome bee just visible on the far left. 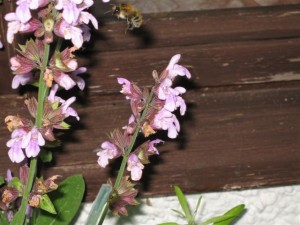 More sage and another bee.

Every now and then I come across a reference to a dye source from the past that I find surprising. My surprise is usually because the dye in question is often not one in common use today. One such dye source is sage, Salvia officinalis, which was used in mediaeval times. Sage is one of the dyes mentioned in the Plictho de larte de tentori, a collection of dyeing recipes published in Venice in 1548 and compiled by Gioanventura Rosetti, the Master of the Arsenal in Venice.  Although I suspect few natural dyers today would regard culinary sage as a common dye source of choice, the leaves give subtle shades of mustard yellow/ brown and an iron modifier gives attractive tones of deep mossy green. When I cut back my sage bushes, which can grow rampantly if not checked, I dry some of the prunings for culinary purposes and use the rest in the dyepot. (See the post “Anglo-Saxon Dyes part 2 ” for examples of colours from sage leaves.)

A friend phoned me last week to ask whether I had heard of privet, Ligustrum vulgare, being used commercially in the past in Wiltshire as a dark green dye. She had read about this in a novel but I don’t know whether the reference was to privet leaves or berries, so I wonder whether anyone else has more information about this? Privet leaves give a yellow shade, which would become a mossy shade of green if modified with iron, and perhaps they were used instead of a more traditional source of dye because  privet happened to be readily available locally in the wild at the time and was therefore a cheap alternative? As far as privet berries are concerned, according to a reference in Dominique Cardon’s “Natural Dyes”, the juice from the berries was used in the past to dye the red, violet and blue colours on playing cards. There is an illustration in her book of an 18th century cardboard playing card from Nimes, on which privet berry juice has been used as a dye. Red was achieved using Glauber’s Salts (sodium sulphate) and potassium sulphate, urine was added for violet, and lime and potassium sulphate were used for blue.

Another unexpected source of dye colour is the reported use of damsons, Prunus sp., as a dye for a variety of purposes, including dyeing hats for the Luton straw hat industry and dyeing wool for the textile industry in Westmoreland. Apparently, damson trees were planted around Market Drayton in Shropshire, and also in Worcestershire, to meet the demand for dye, and some damson bushes found today in hedgerows or in old orchards are the remains of trees grown for dyeing and not for damsons for eating. In my experience, with the exception of buckthorn berries, berries generally make poor dyes, especially on animal fibres, and the colours from berries tend to fade rapidly. So I am surprised that damsons, which are so good to eat, should have been specifically grown to be used for dyeing, when more reliable, traditional dye plants could have been grown. However, it may be that the colours given by damsons could not be achieved from dyes that could be grown or were readily available at the time. It would also appear that, in the past,  berries containing anthocyanins were frequently used by painters and dyers in those areas where they were abundant. For example: the blue in an early Swiss linen fragment has been attributed to elderberries and several early dye references from Germany, Italy and Sweden include recipes for bilberries. (Ref: Cardon p243 – 250) Of course, it is not surprising that early dyers would make use of what was growing around them. However nowadays, when we have access to so many excellent dyes from all over the world, dyers are able to select the most reliable dyes for their purposes and no longer have to make do with whatever is available locally.

The other reference I came across recently in a magazine was to the use of nettles, Urtica dioica, to dye camouflage military uniforms in the First World War. I know that nettles were used to produce fibres for cloth for military uniforms during the First and Second World Wars, but I had not heard before that they were also used as a khaki dye. Certainly, in wartime when it would have been important to find cheap, local sources of dye colour, the use of nettles sounds perfectly sensible. Nettles give various shades of yellow or brown, depending on the time of year when they are harvested, and the use of iron would give a khaki colour. I suppose it’s also possible that the same nettles could be used for both fibres and dye colour.

Does anyone else know of similar unexpected dye sources from the past?

More of my Summer GardenA Red from Goose Grass?
Scroll to top