As I have recently harvested some of my dyer’s broom and gathered some weld from the roadside, my thoughts have been turning to sources of yellow dye.

This weld was growing on some waste ground at the roadside. When I harvest weld from the wild, I always make sure to cut each stem above the last two or three side shoots, so they can develop and produce flowers and seeds for the next crop. I also shake some seeds from the harvested stems on to the ground below the plants. 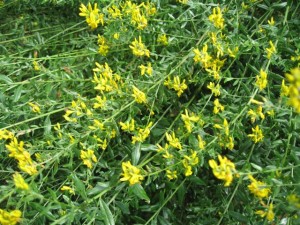 Some of the dyer’s broom growing in my garden. This plant is easy to harvest, as I treat harvesting for the dyepot as a way of pruning the bushes. In good summers,  it’s possible to harvest dyer’s broom twice – once in late June and again in September.

Yellow is the most common colour available from plants and is usually the one with the poorest light fastness. I think it is probably also a colour dyers tend to require less frequently, unless they are using yellow to create greens in combination with indigo. When dyeing yarns or fabrics for items of clothing, or for furnishing fabrics, yellow tends to be required mainly in relatively small quantities to provide contrast with other colours. Creative artists may use yellow more frequently in tapestries or wall hangings and in these situations the fastness of the source of yellow dye is particularly crucial. Of the numerous sources of yellow available, weld (Reseda luteola)  is one of the most permanent, although technically it has a low fastness rating because of its tendency to “fade”. (See Gill Dalby’s “Fast or Fugitive” for details of light and wash fastness ratings of dyes). However, the term “fade” refers technically to any change in colour, not only to a reduction in depth of colour, and weld actually “fades” to a darker, rather than a lighter, hue as time passes. This means that, although weld may lose some of its brilliance over the years, it will not usually become significantly paler. So when selecting a source of yellow, weld is my first choice, with dyer’s broom (Genista tinctoria) a close second. Dyer’s broom contains many of the same dye pigments as weld and produces very similar yellows, although they may not always have the brilliance of yellows from weld. Weld and dyer’s broom are traditional European dyes and are also easy to grow. Weld is a biennial so it needs to be re-sown, but dyer’s broom is a perennial shrub, which is also a very attractive garden plant.  Both dyes are best used with an alum mordant, although they will produce reasonably strong shades on unmordanted wool if followed by an alkaline modifier, such as washing soda or wood-ash-water. When used fresh, weld and dyer’s broom sometimes give stronger, more acidic yellow colours than those obtainable from the dried dyestuffs. If you gather weld or dyer’s broom and dry it for storage, it is best stored in closed brown paper sacks, well away from the light.  If stored in this way, the dried dyestuffs should give good, strong colours in the dyebath.

Rhubarb root (Rheum spp.) is also a very useful source of yellows, particularly as rhubarb root can be used without a mordant. Both culinary rhubarb and ornamental rhubarb can be used for dyeing. I find it best to chop up the root before it is dried as, once dried, the root can be very difficuilt to cut up because it is so fibrous. Another method is to reduce the root to useful-sized chunks, (50gms for example) and then freeze the chunks separately in clearly-labelled plastic bags. Freezing breaks down the fibres, so the root is much easier to chop when thawed out. Rhubarb is not poisonous but it is a common ingredient in laxatives, so it is advisable not to mistake it for a foodstuff when you remove it from the freezer. I usually label it not only on the outside of the plastic bag, but also on a piece of stiff card, which I put inside the bag. Rhubarb root is a strong dye and as little as 25% – 30% will usually give a good, clear yellow. If you use too high a percentage, you may miss the yellow and end up with a mustard colour, so it is better to start with a little and then re-dye if necessary to build up the colour. However, if you do end up with mustard, using an acidic modifier (clear vinegar, for example) will usually shift the colour to yellow.

Of the yellow dyes not native to Europe, fustic (Chlorophora tinctoria) is, in my opinion, one of the best. Some dyers may be lucky enough to be able to obtain Quercitron, the inner bark of the black oak tree, from the USA. This dye source was highly prized in the past for the beauty and clarity of its colour and for its fastness properties, but is rarely available in the UK. A little while ago I was kindly sent some from the USA and I was delighted with the glorious colours it gave, so if you find quercitron on offer anywhere, I would highly recommend it.

Many other garden plants provide sources of yellow – indeed the majority of plants will yield some sort of yellow or beige. The Spring leaves of most fruit trees give yellows and even Himalayan Balsam (Impatiens balsamina), which grows so rampantly here along riverbanks and at roadsides, will give very pretty shades of buttery yellow. Among the most useful readily-obtainable sources of yellow are birch leaves (Betula spp.), goldenrod (Solidago spp.), dyer’s chamomile (Anthemis tinctoria), coreopsis (Coreopsis spp.), and tansy (Tanacetum vulgare). And I mustn’t forget buddleia, which featured in an earlier post. 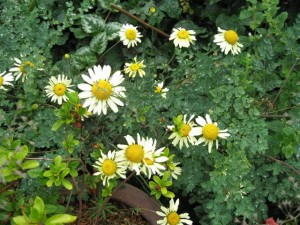 Dyer’s chamomile growing  in my garden. I rarely use the flowers for the dyepot as they look so pretty on the plants. There are several varieties of Anthemis tinctoria available from garden centres and all are lovely garden plants. Although a relatively short-lived perennial, dyer’s chamomile seeds itself readily, so it’s not usually necessary to buy new plants. 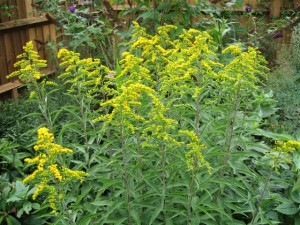 Goldenrod in my garden. Some gardeners dislike goldenrod, as it spreads so rapidly, but I value it, not only as a useful source of dye colour, but also as an attractive garden plant, especially when grown next to a deep purple buddleia.

Other dyers will no doubt have their own favourite yellow-producing plants and of course there are many plants that give shades of mustard, rather than a clear yellow. I have concentrated here on my own favourite readily-available or easily-grown sources of yellow and I apologise for any serious omissions. 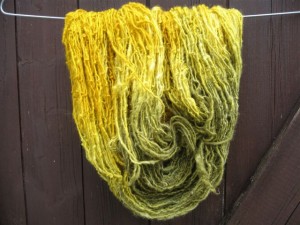 This alum-mordanted wool skein was dyed with goldenrod, using alkaline and iron modifers to create the colour variations.

Dyeing with MadderWorkshop at Denny Abbey
Scroll to top