I was contacted a little while ago by Carol Leonard, an old friend, fellow dyer & spindle-spinning expert, who wondered if I could shed some light on an interesting result from a dahlia dyebath.

Carol explained that a student on one of her spinning courses had tried a dye experiment, using dahlias that had been in the house for a few days in a vase and were past their best. She used no mordant and, she thought, an aluminium pan and the pan and the skeins (wool and mohair) had been properly cleaned. She simmered the flower heads, then put the yarns in with them.  When she removed the skeins there was the faintest pink colour on them, most of which disappeared when the water was drained from them.  So she put the yarns back into the pan with the flower heads, put the pan on one side and then forgot about it for a couple of weeks.  During that time, mould grew on the surface, and the dyebath probably fermented.  When she next looked at the skeins, they had become a bright pink.

Carol wondered whether the fermentation had produced an alkaline bath, which caused the skeins to turn pink. Fermentation may certainly have played a part, although I would have thought this would make the dyebath more acidic, rather than more alkaline. (At least that’s the case in indigo fermentation vats, when washing soda has to be added from time to time to maintain an alkaline pH.) An alkaline modifier usually produces vivid orange-rust colours with dahlias, but I’ve never got a pink.

However, I think one clue to this colour may lie in the fact that the dahlias were purchased from Asda supermarket. Sometimes flowers purchased from florists or supermarkets have been dyed extremely bright colours, probably to produce colour-co-ordinated bouquets. I’ve been given bunches of beautifully-arranged and brightly-coloured florist’s flowers only to discover that they had been dyed. This became clear when much of the colour came off on my hands, and also into the water, when I put the flowers into a vase. So perhaps this pink was a result of some dye on the dahlias, which then leached into the water in the dyebath.

I wonder whether anyone else can offer any other suggestions as to the reasons for this fascinating and puzzling colour result?

I have some pink dahlias in a vase as I write this, so when they have faded they will be destined for the dyepot. I will be interested to see whether I can get similar results from a fermentation dyebath, but I suspect I will not, as my dahlias have come directly from the garden and have most definitely not been dyed! 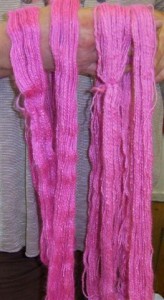 This photo shows the wonderful pink shade from the fermented dahlia dyebath.

P.S. to YellowsProblems viewing my blog?
Scroll to top