I have been following Leena’s posts (www.riihivilla.com) about her experiences with using her home-grown woad leaves and I was particularly interested to learn about the method which gave her the best results. Although this method is very similar to the one I have been using for over 30 years, one element of it was new to me. I usually start by pouring boiling water over the chopped woad leaves and leaving them to steep for about 30 minutes.  I then strain off the liquid and squeeze the last drops of juice from the leaves before discarding them. I then allow the liquid to cool to 50C before adding the washing soda and whisking to introduce oxygen and precipitate the indigo dye particles.  However, Leena’s preferred method requires the whole unchopped leaves to be simmered in boiling water for about 3 minutes, after which the leaves are left to steep in the hot water for 15 minutes. The water is then strained off, the leaves removed and cold water added as necessary to reduce the temperature to 50C.

Leena’s recipe then proceeds much as the recipe I always follow. In both our methods, washing soda is added until the solution is around pH10 and then the liquid is whisked until blue froth forms. This whisking continues until the froth that is forming ceases to be blue and changes to white. Both methods then continue in exactly the same way, by adding the reducing agent and then using the vat once the liquid has changed in colour to greeny-yellow.

I decided to test each of these methods using the same quantity (400gms) of leaves for each, picked on the same day and grown under the same conditions. I left the leaves for Leena’s method unchopped but chopped the leaves for my method, as that is what I usually do. I then tested the two dye vats using the same weight of the same type of wool for each dip in each vat and leaving the wool in each vat for the same length of time. This ensured that each vat was used in the same way, so the experiment had some validity. 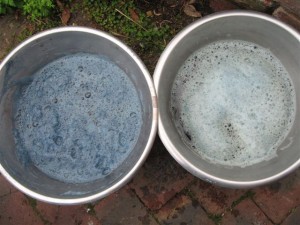 On the left: the blue froth formed following my method

On the right: the blue froth formed following Leena’s method.

As the froth on the surface on the left seemed a much deeper blue, I was expecting to achieve deeper blues on the yarns dyed in this vat. So at this stage I was beginning to feel that my method might, after all, prove to be the better one. But “pride goes before a fall”! 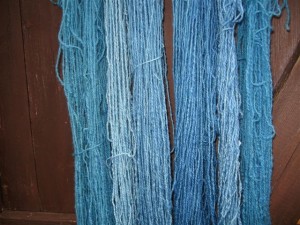 The question now is: which method will I follow in future? For workshop or demonstration purposes, I think my method is simpler because it doesn’t require a heat source and it gives perfectly good results. However, for my own purposes, I shall probably try out Leena’s method again, as it may enable me to get slightly deeper shades of blue. So my thanks to Leena for introducing me to a new and useful method.

Dyeing with DamsonsP.S. to my Recent Woad Experiment
Scroll to top