As a final experiment based on Leena’s method of making a vat with fresh woad leaves, I thought I would make two more vats, using unchopped woad leaves for one and chopped leaves for the other. I felt this should give an indication as to whether chopping the leaves increases the blue potential and, as usual, I set out with my own pig-headed opinion as to which would give the better results – chopped leaves, of course. After all, I always chop other fresh dyestuff into the smallest possible pieces, in the belief that the more surface areas there are, the more dye colour will leach out. Of course, the chemistry of indigo dyeing is quite different from that of dyeing with other plant materials, so it may well be that the advantages of chopping the dyestuff do not apply to woad leaves when dyeing blue.

To make sure the experiment had some validity, I used the same preparation and dyeing methods for each vat and I also used the same weight of leaves and skeins. I first simmered the leaves, chopped and unchopped, for a few minutes before steeping them for 15 minutes. I then added cold water to bring the temperature down to 50C and continued as described in my last post. 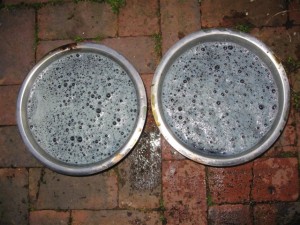 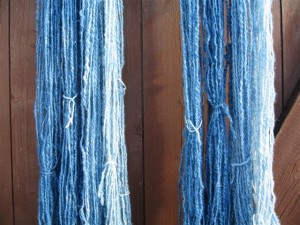 The skeins were dipped in each vat for about 5 minutes each time and in the order in which they appear in the photo. So each vat was used four times and for one skein each time. The skeins dyed in the vat made from chopped leaves are very slightly deeper in colour but the difference in depth of blue is so tiny as to be barely noticeable.

So, contrary to my expectations, it would seem that chopping the leaves makes very little difference, if any, to the depth of blue achieved. That is certainly good news for those of us who like things to be as simple as possible. Now I suppose I should try my usual method, rather than Leena’s, using both chopped and unchopped leaves, to see whether similar conclusions can be drawn when using a slightly different method. But perhaps I’ll leave that test for next year.

A Woad Experiment A Grass from Japan
Scroll to top