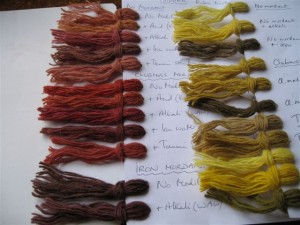 This shows some of the range of shades from madder (Rubia tinctorum) on the left, and weld (Reseda luteola) and dyer’s broom (Genista tinctoria) on the right. 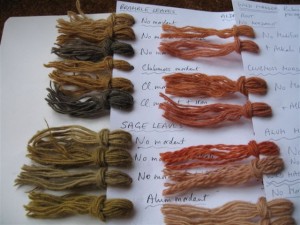 The shades on the left are from bramble leaves and sage leaves. On the right are some of the shades from wild madder (Rubia peregrina) & lady’s bedstraw (Galium verum)

Most of the dyes were tested as follows:

The mordants used were clubmoss mordant, tannin mordant (oak gall or bramble leaf solution) and no mordant.  The modifiers used were clear vinegar (acid), wood ash water (alkali) and iron water. For the deepest black shades from tannin-rich materials, such as alder bark and oak galls, I used an iron water mordant followed by an iron water modifier. Too much iron does, of course, weaken fibres but iron water is slightly less harmful in this respect than the chemical ferrous sulphate. For a brownish purple shade from madder I used an iron water mordant followed by a wood ash water (alkaline) modifier. Where appropriate for comparison purposes, I also dyed some samples using wool mordanted with 10% alum.

For a further test with madder, I added chopped crab apples to the dyebath. I remembered reading about this some time ago, although I’m afraid I can’t recall where, and thought it worth trying out. I was pleased with the results, as this dyebath gave brighter, clearer shades than those from madder used alone and worked particularly well on unmordanted wool.

I was interested to note that yellows almost as bright and deep as those from a traditional alum mordant could be achieved from weld and dyer’s broom used on unmordanted wool and followed by an alkaline wood ash water modifier. Pretty olive green shades were achieved using an iron water modifier with weld, dyer’s broom, bramble leaves and sage leaves.In general, wood ash water proved useful to deepen and brighten shades. (Stale urine could also be used as an alkaline modifier, as it contains ammonia, but the aroma is perhaps less acceptable.)

To make wood ash water, remove the wood ash from a wood-burning stove, put it in a bucket or large lidded container and fill up with water. The leave the mixture to soak for several weeks. By this time the liquid will have become yellow in colour & feel “slick” or slimy to the touch. To use it as an alkaline modifier, remove the liquid without disturbing the ash sediment and soak the materials in it, adding more water as necessary. It’s better not to apply heat, as this may harm woollen fibres.

Unfortunately the photos don’t show the colours to their best advantage but I was pleased with the results of these tests, which indicated that the early Anglo-Saxon dyers would have been able to achieve a wide range of good, strong colours using only readily available materials and without using mineral alum as a mordant.

As far as light- and wash-fastness are concerned, I imagine these would have been of less importance to the Anglo-Saxons than they are to us today. Clothing was probably not washed as frequently and, if colours faded, clothing could be re-dyed relatively easily, especially as most of the dyes I used in my tests can be applied using little or no heat. As most garments were loose-fitting, a small degree of shrinkage might not have mattered too much. However, the classic dyes, madder, weld and woad, and the tannin-based dyes, such as walnut, oak leaves, oak galls, alder and bramble, all have reasonably good fastness properties, even when used without a mordant, so fading would not have been too much of a problem.