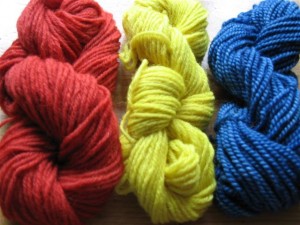 These are the classic dyes: madder, weld and woad.

I have always been interested in researching the dyeing methods of the past. The Anglo-Saxon period (cAD450 – AD1066) is one that particularly interests me, especially the early Anglo-Saxon period (AD450 – AD700).  There is much evidence that, even at this relatively early stage in our history, craftspeople were highly skilled and capable of remarkable levels of craftsmanship, including textiles woven using a variety of sophisticated and complex weaving techniques. The Anglo-Saxons had a variety of naturally-coloured sheep breeds, ranging from beige and brown to grey and black, so some colour patterns could be achieved without the use of dyes. However, dyes were necessary to achieve truly bright shades and to extend the colour palette.

One thing that is still not clear is whether the dyers of the early Anglo-Saxon period would have had access to alum mordants.  Alum shale was not discovered in England until the 17th century and before then alum had to be imported, mainly from the Mediterranean. Most experts seem to doubt that mineral alum would have been available widely, if at all, in England during the early Anglo-Saxon period, although it is certainly possible that the necessary trade routes may have been established. Nevertheless, it is perhaps unlikely that a product like alum, that had to be imported, would be readily available to everyone, and most probably more humble dyers would have had to manage without it.  So what colour range could they have achieved without using an alum mordant?  And what alternative mordants or fixatives might they have used?  These considerations formed the basis for my experiments.

The purpose of my tests was to investigate some of the range of shades available to dyers of the period, using only materials to which they would have had easy access.  So as my main mordants I used aluminium extracted from clubmoss (see below for more details) and tannin from oak galls, with iron water, vinegar and wood ash water as colour modifiers. As wool would have been the main fibre used by most people, I limited my tests to wool only. Linen and hemp were also used in the period but they appear to have usually been left undyed.

To prepare the tannin mordant, I simmered 50gms of oak galls for about 30 minutes, strained off the liquid and then simmered the fibres in this solution for 30 minutes. This oak gall solution can be stored and re-used several times. As a result of this mordanting  process the fibres become light brown in colour and this sometimes has an effect on the colours dyed on a tannin mordant, making them darker or duller.

Although mineral alum may not have been available, excavations at the later Viking Age (Anglo-Scandinavian) site in York (9th – 11th centuries)indicate that dyers there probably used a mordant prepared from clubmoss, which has the ability to accumulate aluminium from the ground in which it grows. However, as the particular clubmoss species found (Diphasium complanatum) is not native to Britain, it is thought likely that it was brought by the Vikings themselves, who were probably familiar with its use as a mordant. Diphasium complanatum is not the only clubmoss capable of absorbing aluminium and it is possible that the Anglo-Saxons may have also used a native species of clubmoss as a source of aluminium for mordanting. Based on this possibility, I decided to try this as part of my experiments. Extracting aluminium from clubmoss is not easy and I would recommend it only for research purposes.  I used fir clubmoss, imported from Europe as I did not have access to any locally, but the extraction process takes several days, during which time the liquid has to be kept fairly hot, and application to the fibres takes a similar length of time. I used a recipe from Scandinavia that I happened to come across in a dyeing book from Germany, “Farben aus der Natur” by Gretel Fieler. (Recipe details below) Using alum-mordanted wool and unmordanted wool as controls, my tests with madder indicated that I did indeed manage to mordant my wool samples with aluminium from clubmoss. The resulting shades were very close to those achieved on an alum mordant and certainly redder in tone than the shades produced on unmordanted wool. But more about that later.

Recipe for clubmoss mordant (Lycopodium selago) : Use 100% clubmoss, chop it into small pieces, then pour water over it and heat the mixture to 40C. Keep at this temperature for 3 days, then boil up the mixture once briefly, strain off the liquid and leave to cool. Then add the wool and heat slowly to 40C. Repeat this heating process daily for 3 days. Allow to cool, then remove the wool and rinse.

As far as dyestuffs were concerned, for blues I used woad (Isatis tinctoria) and for purples I used the lichen Ochrolechia tartarea. Lady’s bedstraw (Galium verum) and wild madder (Rubia peregrina) were used for orange and coral shades, and weld (Reseda luteola) and dyer’s broom (Genista tinctoria) for yellows. Madder (Rubia tinctorum), the source of red dye, is a little more problematic. Although madder was available and used during the Roman period, it seems to have disappeared for a while with the departure of the Romans from Britain, suggesting that the dyestuff, rather than the plant, had been brought by the Romans. There is evidence, however, that cultivated madder was in use by the 7th century, so I included it in my tests. Various tannin-rich materials, such as alder, bramble, oak and walnut, were used for browns and black. Walnut, although not native to Britain, was probably introduced by the Romans and there is some evidence that walnut would have been available during the period.

The test results were interesting and provided a wide range of strong colours. 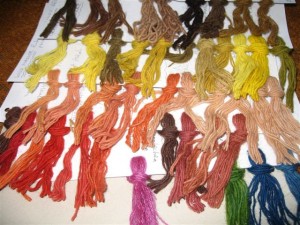 This image shows a selection of colours from my tests.

In Part 2, I will start to describe the experiments in more detail.