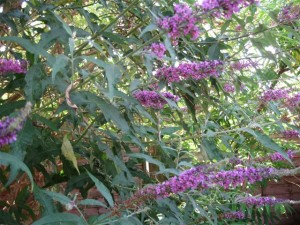 Those of us who have buddleia bushes in the garden tend to accumulate a great deal of pruned material, when the bushes need to be cut back.

I have used these prunings in the dyebath several times and achieved some pleasing results. This year I have already cut back one of my buddleia bushes and this time I decided to separate the dead flower heads from the leaves and stems to see which parts gave the most colour. 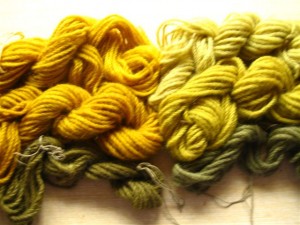 I poured boiling water over the materials for each dyebath and left them to steep overnight. In the morning I simmered the dyebaths gently for about 45 minutes, then added the skeins. I left the plant materials in the dyepot for the unscientific reason that I was too lazy to look for my sieves to strain off the dye liquid. Yes, I know I should be ashamed of myself! In general, I usually strain off the dye liquid to avoid having unwanted plant pieces lurking among the dyed skeins. However, it doesn’t really matter whether the plant pieces remain in the dye pot or not, as long as the dye colour has been properly extracted. The notable exception to this generality is madder root, which most dyers prefer to leave in the dyepot, as it gives up its colour gradually at temperatures below a simmer. (More about madder dyeing to follow in a later post.) There will no doubt be other dyes that some dyers prefer to leave in the dyepot and the choice is really a personal one. Once the skeins had been added, I simmered gently for about 30 minutes then left the skeins to steep until the dyebath had cooled. I was interested to note that the unmordanted skeins took up almost as much colour as the alum-mordanted ones, although only light- and wash-fastness tests will show whether the dye is as fast on the unmordanted skeins.

The amount of colour available from the dead flower heads was surprising. In future I will probably continue to separate the plant parts and make two dyebaths, as this extends the colour range available.