Dyers who grow woad will often find they have far more woad seeds than they could possibly need for sowing themselves or passing on to other dyers.

Some years ago I did some tests using ripe purple/black woad seeds in the dyepot and I was intrigued by the results. 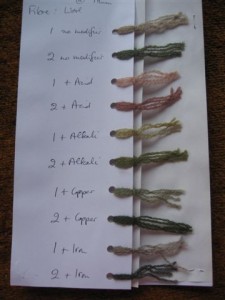 Recently I collected a bagful of woad seeds for a dyebath. This time about half of the seeds I used in the dyepot were not fully ripe and were still green in colour, rather than purple/black. The colours I obtained this time were less interesting, suggesting that it is advisable to allow the seeds to mature fully and become black before using them in the dyepot. 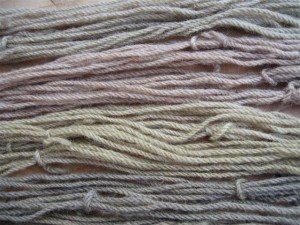 From top to bottom the samples are: No modifier, + acidic modifier, + alkaline modifier, + iron modifier. For each category there are two samples: the upper one is unmordanted and the lower one is alum-mordanted. The shades are very similar to those achieved from the earlier dyebath using fully mature seeds, but considerably less intense.