Recently I went with members of the Bedfordshire Guild of Weavers, Spinners and Dyers to spend a pleasant evening admiring alpacas. These particular alpacas belong to David Titmuss, the son of one of our members, Toni Titmuss, and David and his wife had kindly invited us to visit their farm for one of our meetings. The early evening sunshine bathed everything in a warm glow and the alpacas were happy to be photographed, although they quickly lost interest if required to pose for too long. 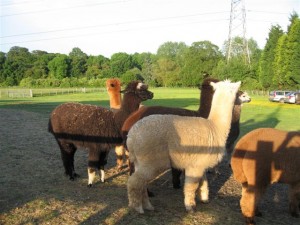 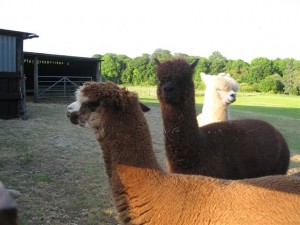 The natural colours of the alpacas vary from white, cream and beige through various shades of rust and brown to almost black, and all these colours are lovely. The fleece can be extremely soft and a pleasure to handspin. Of course, as a dyer, I was interested in testing some dyes on white alpaca fleece, so I got my dyepots ready for a few experiments on some of my skeins of handspun alpaca. 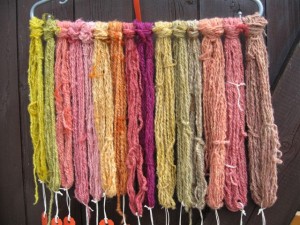 In general, I was pleased with the depth of colour I achieved. However, as alpaca tends to be more “hairy” than sheep’s fleece, and less “woolly”, the colours are probably less saturated than those achieved on sheep’s wool. One other thing I learned about working with alpaca is the importance of washing the fleece very well before spinning and dyeing it. When spinning sheep’s fleece, I often soak the sorted fleece overnight to get rid of any dirt, then spin “in the grease” and wash well afterwards and before mordanting or dyeing. This method proved less successful with alpaca. I found the grease was difficult to wash out after spinning and this caused patchy results from some of the dyebaths. I got much better results with alpaca fleece that had been well washed before spinning. After spinning, I washed the skeins again and then mordanted and dyed them.

Fungi galore – againWhat do I actually do?
Scroll to top