Last week I led my first workshops in our new local area, working with dyers from several groups in Sussex for two days of plant dyeing.

The workshops took place in Stanmer Park, which is a beautiful location next to the University of Sussex, just outside Brighton. The venue for our workshops within the park was the Plumpton College potting shed, which had many stainless steel work tops, a couple of power points and a large ceramic sink, but rather limited space to move around. However, this did have the advantage of making it easy to communicate with everyone at close quarters. We used gas and electric heat sources and obtained a range of colours from madder, weld, rhubarb root, buckthorn bark, indigo and woad, plus one or two plants selected at random from the park.

Inside the potting shed

Among the participants were experienced dyers and some relatively new to the craft. The opportunity to share and exchange skills and experiences was appreciated by all of us. One thing I learned is that storing fresh woad leaves in a fridge for over 24 hours may not be a good idea, as the vats made from fresh leaves that had been picked two days before they were to be used were not successful. The kind person who provided these leaves had kept them in the fridge for about 24 hours and I would not have expected this to have destroyed their blue dye potential, although I’ve never stored woad leaves in this way before. As we didn’t want to use them until the second day, we removed them from the fridge in the late afternoon of the first day, poured boiling water over them  and left them to steep overnight, ready to use the next morning. Unfortunately there was no way they could be persuaded to yield blues, although some generous participants declared themselves pleased with the yellowish colours achieved from the vat. However, the same leaves were then simmered to produce some pleasant pink-tan shades, so the experiment was not entirely without success.

The vat made using one woad ball was more successful. (See my earlier post for details of using woad balls.) 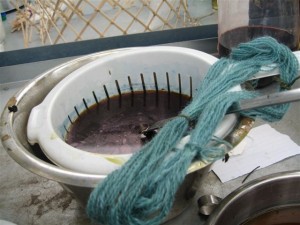 One skein dyed in our small woad ball vat

Another successful experiment was with powdered rhubarb root. I made a strong, hot solution of washing soda and water, added the rhubarb root and stirred very well. The solution gradually became a deep red colour and we added some alum-mordanted and unmordanted skeins and left them to steep without heating. (NB Never heat washing soda solutions when dyeing wool or other animal fibres, as this may destroy the fibres.) After several hours both the mordanted and unmordanted skeins had become a rich madder-type rusty red. I was surprised to achieve such a rich red shade, as my earlier experiments using this method of dyeing with rhubarb root had produced paler, pinker shades. (See my earlier posts on dyeing with rhubarb root.) I suspect the difference in colour depth was probably because this time I used a stronger concentration of rhubarb root and washing soda.

The madder dye bath was made with freshly-dug madder roots, which gave excellent colours. Before use, the root was washed well and we also rubbed off some of the outer bark-like layer. We then chopped it as small as possible and poured boiling water over it. We left the root to steep in the hot water for about 2 minutes, then poured off the liquid into a dye pot. Then we poured boiling water over the same root again and left it to steep as before. Then we again poured off the liquid into the dye pot. (Note: this process removes some of the yellow and brown pigments which can make the dyed colour too rust in tone, rather than red. The liquid from these “steepings” can then be used for a further dyebath to achieve coral/rust shades.)  This pot of dye solution was put to one side for later use and we returned to the madder root, which we simmered again in fresh water for about 30 minutes until we had a rich red liquid. This was strained off and became our first dyebath. We allowed the temperature to cool a little, (if the temperature is too high when the fibres are added, they may become too brown in tone), then added unmordanted and alum-mordanted skeins. These were left to soak in the dye liquid without any further heat, until they had achieved a suitable depth of colour. Some of the skeins were then treated in acid, alkaline, copper and iron modifiers, giving a wide range of red and coral shades. Then we used the combined liquids from the first two madder root “steepings” to make a further dyebath, from which we achieved orange/coral colours. The same madder root can also be re-simmered for another dyebath, which will produce paler shades of coral.

To show the participants what can be achieved without a mordant, we used weld (dried, rather than freshly harvested) on unmordanted skeins. The weld gave good colours and the skein modified in washing soda was almost as brilliant and deep in colour as skeins mordanted in alum would have been. (Note: when storing dried weld, it’s important to keep it away from the light, otherwise much colour potential may be lost. I usually store dried weld in brown paper sacks.)

The following photos show some of the colours we achieved. 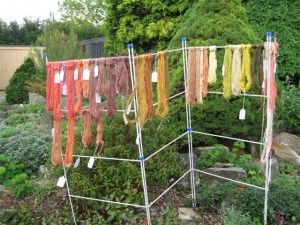 Some of the madder, weld and rhubarb root results 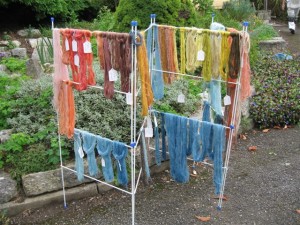 Dyed skeins, including the blues