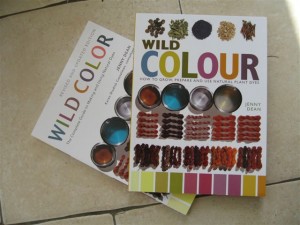 The UK version of the revised edition of “Wild Colour” is now available and the US version should be available in November. Several people have contacted me with queries about these two editions, wondering whether they are in fact the same and why one edition appears to be more expensive than the other in pounds sterling on Amazon. I thought I would try to clarify matters by explaining that the only real differences between the two editions are in the spellings of words such as “colour/color” and in word usage, such as “clingfilm/saran wrap”. As far as the plant details are concerned, there is a slight slant in emphasis in the first paragraph of the woad pages in the US version, mainly because woad is considered to be a noxious weed in some US states. Apart from that, the text on the other plant pages is virtually the same in both editions, except for some spellings. The bibliography pages in each edition also vary slightly, as the US publishers insisted on including a list of US suppliers, which meant that some titles had to be removed from the US edition’s bibliography to make space for this. I chose not to reduce the bibliography to include suppliers in the UK edition, partly because so many readers will have internet access and it is often more reliable to find suppliers that way, as over the years of a book’s life most lists of suppliers tend to become out of date. Also, because limitations on the space available would have meant that I could only have included some suppliers and not others, I wanted to avoid causing offence to any supplier not included. As far as the dyeing instructions are concerned, they are identical in each version, so it really doesn’t matter which one works from.  Both editions are paperbacks and the front covers also differ slightly. I am disappointed that the words “revised and updated edition” don’t appear on the front cover of the UK version, although they do appear inside.

Some people have also assumed that, as Karen Casselman seems to appear as “co-author” in the Amazon description of the US version, she must have part-written the book, which would make it a different book from the UK edition. This assumption is false. Karen Casselman played no part in this revised edition of “Wild Colour” but the US publishers insisted her name should remain on the cover of the US edition, probably because she was the “consultant” on the first edition of the book. The US publishers of this first edition insisted that there should be a known N. American “name” associated with the book,  because they feared that otherwise “Wild Color” might not sell in the US, as my name would probably not be known to US dyers. Apart from providing the “name”, Karen Casselman’s role was to advise on matters specific to N. America, such as where in N. America certain plants might be located and whether there were restrictions on growing certain plants in some US states. The text of all editions of “Wild Colour/Wild Color” has always been mine and mine alone, so any errors are solely mine and not the responsibility of anyone else.

Perhaps I should also add a few words here about how and why the revisions were made. When the publishers told me they were prepared to reprint “Wild Colour”, I would have been happy for the text to have remained unchanged as, to my knowledge, it did not contain any errors or any out-of-date information. However, the publishers would only reprint if I made changes to 30% of the book’s text pages. These changes could be small (eg to only one word or sentence on a page) or could include larger changes, such as revisions to several paragraphs. But whatever changes I made, they had to fit into the text areas as already established around the colour sections and photos, because none of the existing colour sections could be moved or changed.  I was also not allowed to add any further pages, so I couldn’t add any more plants or techniques, which would probably have been my chosen way of revising the book. It was also not possible to add plants or techniques by replacing existing ones, as the added ones would not fit with the existing colour photos, which could not be changed. Text could only be added in any spaces at the top of pages above photos, as in the green boxes added on pages 39, 41, 55 and 57, or on pages where the text did not run to the bottom of the page. Otherwise, revising meant painstaking juggling of words, so as to retain the same number of letters + spaces while also making changes, such as in the changes made to some of the indigo and woad dyeing methods. Readers familiar with both editions of “Wild Colour” may find it difficult to locate the revisions, because at first glance the books appear so similar, but changes actually occur on pages: 15, 25, 30-31, 36-37, 38-39, 40-41, 44-45, 46, 49, 52, 54-55, 56-57, 58, 69, 74, 78, 83, 94, 98-99, 100-101, 102, 105, 110, 114-115, 119, 120, 125, 133, 139, 140-144

I hope all these comments help to clarify matters.