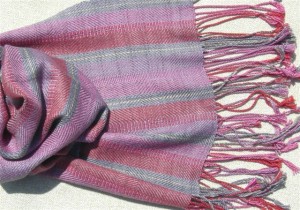 This scarf was handwoven by Maggie Stearn, using a mixture of handspun merino wool and some silk yarns, all naturally-dyed by me, using extracts of logwood, madder, fustic and cochineal. The handspun wool was so fine that I knew I’d never use it for knitting, so I commissioned Maggie to make this scarf for me, incorporating some silk yarns as well. I was thrilled with the results and love wearing this scarf. Unfortunately, the photo doesn’t do justice to the sheen and drape of the scarf, or to the subtlety of the design and colours.

I have the utmost respect for the craft of handweaving and I know I would never be capable of the application and skill required to see a weaving project through from start to finish. In fact, a kind friend did set up my 2-shaft table loom for me about 30 years ago and I’m ashamed to say that I’d lost the will to live before she’d finished warping it. So I wove a couple of inches and then gave the loom away to someone who was doing some work on our outbuildings and expressed an interest in weaving. I have to say that I’ve never regretted this impulsive act as, once I’d admitted to myself that I lack the strength of character required to become a weaver, I was free to explore the delights of natural dyeing and handspinning without feeling obliged to continue weaving as well.

A few years ago I was asked by handweaver, Maggie Stearn, if I would be prepared to dye some silk skeins for her handwoven scarves and shawls, as she was interested in developing a range of naturally-dyed items. This seemed like a good challenge, partly because silk is not a fibre I regularly work with and partly because it would give me an insight into some of the colour considerations that play a part in designing for weaving. Also, as the fine silk Maggie uses weighs so little, I would be able to handle the wet skeins relatively easily. (I used to dye large quantities of wool for an Irish blanket weaver and had great problems with mordanting and dyeing the weights involved. After I had badly scalded myself with boiling water, I decided I could no longer dye such heavy batches.)

Maggie trained at Wall Hall College under the tutelage of Mike Halsey, a well-known British weaver, and started off weaving fabric lengths, usually in wool. After some years gaining more experience of the market, she decided to produce mainly silk scarves and shawls, with some cushions and bags, and all in the most beautiful colour combinations. So it was a privilege to become part of her production processes.

Last year I had operations on my right arm and also on my knee, which meant I was unable to do much dyeing for Maggie, but I am now feeling fit enough to start again and looking forward to whatever colour challenges she decides to set me.

Below are some more of Maggie’s scarves. Look at her website (www.mini-webs.co.uk/maggiestearn)  for details of the full range and how to order. 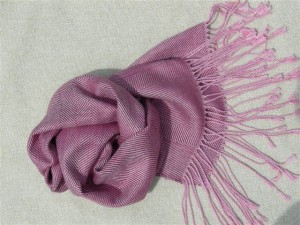 The dyes used here are extracts of cochineal and logwood. 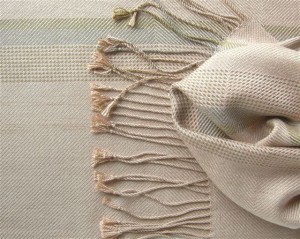 The dyes used here are extracts of rhubarb root, quebracho, wattle and walnut, with a small indigo stripe. 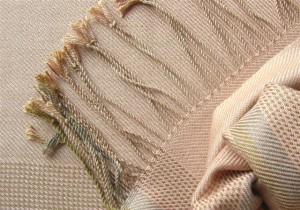 The dyes used here are extracts of quebracho, wattle and walnut, with some fustic and indigo. 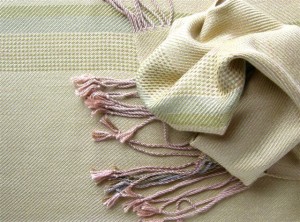 This scarf was dyed using extracts of weld, cochineal, walnut and logwood, with some indigo as well.