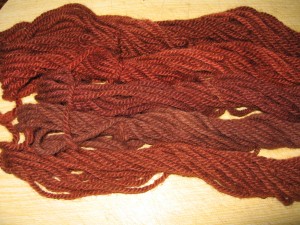 This photo shows the results of my most recent tests using sorghum extract, this time on unmordanted wool. Unfortunately, the telephone called me away from the dyebath, which boiled too vigorously for too long, resulting in much darker shades than I had intended. However, I think it’s just about possible to see the results of the colour modifiers.

I think sorghum could prove an interesting dye source & I must try it again – but next time without boiling the dyebath to within an inch of its life! 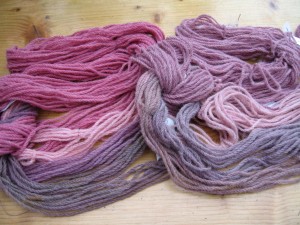 This photo shows some shades, on alum mordanted wool, from Lac Red on the left & from Lac Purple on the right. (Both available from Pure Tinctoria). I was interested to see how separating the red & purple pigments would influence the resulting shades.

Colour modifiers resulted in pleasing variations in shade. Both copper & iron made the colours more purple in tone &, as usual with Lac dye, an acid modifier intensified the colour & an alkaline modifier made it considerably paler. This is interesting, as with most other dyes the results are reversed & the alkali intensifies the colour. In fact, the only other dye I can recall where this effect is noticeable is walnut hulls. Here, too, a vinegar after-bath deepens the shade. 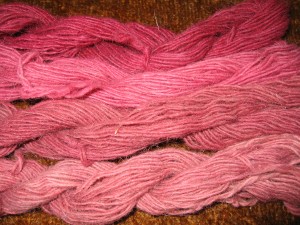 This photo shows the results of another test I carried out on the Lac dyes. This time, before adding the alum-mordanted fibres,  I added clear vinegar to the prepared dyebath to bring it to pH 4. I then added the fibres & simmered the dyebath for about 30 minutes as usual.

The addition of an acid, either citric acid granules or clear vinegar, is a useful way of extracting the maximum dye pigment from insect dyes & works with Cochineal as well as with Lac. However, it tends to produce shades that are redder or more orange in tone, rather than pinker or more purple & if too much acid is added the colour can easily become too orange in tone.