Several weeks ago I was sent some more extracts to try out. This time they came from Debbie Bamford (www.mulberrydyer.co.uk). They were extracts of Brazilwood and Chestnut and also one labelled “Green”. I have tried extracts of brazilwood and chestnut  in the past, and also one from another supplier labelled “Green”, but it’s always useful to be able to try others. Brazilwood extract was in fact on the market about 20 years ago, both as a powder and as a type of resin,  and I used it then. However, when I supplied natural dyes by mail-order, it was interesting to notice how reluctant dyers were to buy the extracts instead of the dyes in their plant form, even when I pointed out that the extracts would actually work out cheaper because they go such a long way. Now, of course, dyes in extract form have become very popular, although some dyers still prefer to process their own dyes from plant to dyepot.

Brazilwood gives lovely reds and a brilliant purple when used with a washing soda modifier and I was very pleased with the results from this extract. I was interested to see that the acidic modifier produced very little change in shade, especially as, when used with brazilwood in its plant form, it usually gives a bright orange. Brazilwood is not as lightfast as the other red dyes, madder and cochineal, but I sometimes use brazilwood over madder-dyed fibres to increase the brilliance of the colours. A little brazilwood extract added to a madder extract dyebath should give good results, although I haven’t tried it yet. 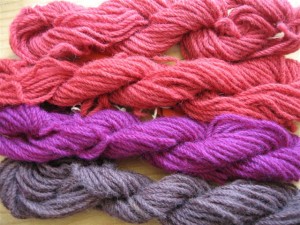 Note: all samples on wool yarn

Chestnut gives soft brown shades and deep grey when used with an iron modifier. As it is rich in tannin, it can also be a useful plant mordant for vegetable fibres and silk. “Green” gave an interesting range of shades and I was particularly intrigued by what happened with a washing soda modifier. (See photo below). The only thing I find slightly irritating is that when an extract is simply labelled “Green”, or given a name such as “Moody Blues”, I have no idea which plants have been used in its production. Of course, I understand that manufacturers don’t want to give away trade secrets, so I’m prepared to cope with my irritation and use the extract anyway. I do keep telling myself that I should stop asking so many questions and just enjoy using the products but still…………………….. 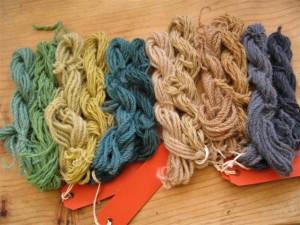