Several weeks ago I was sent some mulberry bark by a kind lady who had collected some from a fallen branch from an ancient tree and thought I might like to try it out in the dyepot. As I’ve never tried mulberry bark before, I was interested to see what sort of colours it might give.

I started by leaving the bark to soak in water for a week or two and then I simmered it for about an hour, before adding some alum-mordanted and unmordanted wool fibres. I used about the same weight of fibres and bark and I kept the temperature just below a simmer, as the tannin in barks can sometimes dull the colour if the temperature is too high. When the fibres had taken up as much colour as possible, I turned off the heat and left them to soak overnight. I then applied alkaline and iron modifiers to some of the samples.

The photo below shows the colours I obtained. 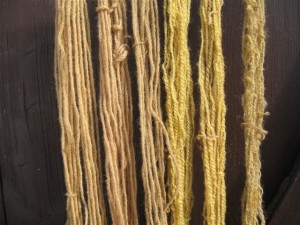 Some of the colours produced from the mulberry bark are more yellow in tone than the colours often obtained from barks and I was interested to see how little they reacted to the two modifiers I used. My thanks to Ann Machin for supplying the bark for this experiment.