As the time for our move to Sussex draws closer and we shall have to leave this house and my dye garden, I thought I would write a little about some of the trees in this garden that have been useful sources of dye colour. 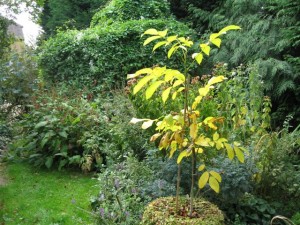 This is a very small walnut tree, I know, but I have cherished it, as I’ve already tried unsuccessfully several times to persuade a walnut tree to establish itself in our garden. This one was given to me as a seedling and, although I have already managed to harvest leaves for dyeing as they fall in Autumn, it will be many years before I can harvest walnuts.

The walnut is rich in tannin and all parts of the tree can be used in dyeing, including the leaves, bark, heartwood and the outer green cases of the nuts. Walnut doesn’t need a mordant – in fact walnut leaves have a higher fastness rating when used on unmordanted wool than if used on alum-mordanted wool. (Ref: Fast or Fugitive by Gill Dalby). Although dried walnut leaves tend to give colours in the yellow to tan range, sometimes fresh leaves harvested in early summer can give deep browns. Different depths of brown can be achieved from all parts of the walnut tree and colour modifiers can be used to vary the shades. Darker shades of brown can often be achieved by using a rhubarb leaf mordant or base and by using an iron modifier. For maximum colour potential, walnut hulls should be soaked in water for at least several weeks before being simmered to make a dyebath and I often leave them soaking for a year or two. As tannin is astringent they don’t seem to develop an unpleasant odour, as long as they are completely covered by the water, but it’s a good idea to check the liquid level every few months, in case some evaporates. It can sometimes be difficult to get really rich browns from walnut hulls and I have found that adding some oak gall solution to the dyebath often results in deeper shades. To apply the dye, I simmer the fibres in the dyebath, then leave them to cool and repeat the process several times until a reasonable depth of brown is achieved. 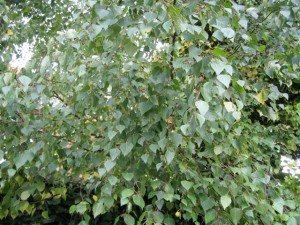 Birches make lovely garden trees, with their leaves trembling gently in the breeze and their attractive bark, and I shall really miss this beautiful tree when we move. Birches are among the most ancient of trees and birch leaves and bark have been used for centuries as dye sources. The leaves give clear yellows and the bark gives shades of tan, brown and sometimes pink. Birch leaves are best used with an alum mordant. The bark can be used without a mordant but an alum mordant will intensify the colours. Birch bark has several layers and the inner layers will often give pretty shades of pink. Like most barks, birch bark benefits from lengthy processing and I usually soak it in water for several weeks before simmering it gently for about an hour to extract the maximum amount of colour. The fibres can be added at any stage, if you intend to leave the bark in the dyebath. However, as small pieces of bark can sometimes be difficult to remove from fibres, I tend to strain off the extracted dye liquid and then I add the fibres, bring the solution to simmering point and then keep the temperature just below a simmer for as long as seems necessary. This is because I have sometimes found that, if a bark dyebath is allowed to boil too much, the tannin in the bark can dull the colours. I then leave the fibres to soak in the dyebath overnight before rinsing them. 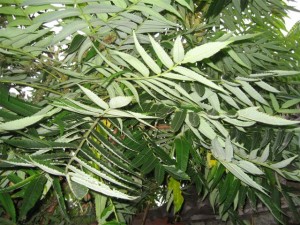 The staghorn sumac tree is particularly rich in tannin and the leaves can be used as a tannin mordant for silk and vegetable fibres. The leaves also give a soft yellow dye and the inner bark of the tree can give attractive shades of rust. Apart from its usefulness to dyers, staghorn sumac is an attractive garden shrub, particularly in the Autumn when the  leaves turn beautiful red and orange colours. Its branches are covered in fine brown downy hairs and, when the leaves have fallen, in silhouette they look like antlers, which is why the tree is called staghorn sumac. Some species of sumac have poisonous berries (usually white) but the berries of staghorn sumac are red and harmless and, when ripe, they form candle-like clusters at the tips of the branches. Although the colours from sumac are not remarkable, they can provide useful contrasts to stronger colours.

I shall certainly miss my garden and all the plants and trees that have provided me with such a variety of dye sources over the last 33 years.

My Garden in Spring Summer is coming
Scroll to top