Blog - Latest News
You are here: Home1 / Dyeing Tips & Recipes2 / The Last of the Fungi?

My own searches for fungi haven’t proved very fruitful as far as dyebaths are concerned but, thanks again to Leena, I still had some stalks of Cortinarius semisanguineus waiting to be used and recently I managed to get round to using them. The earlier samples of colours from Cortinarius semisanguineus were from the caps only and I had been told that the colours from the stalks were usually more orange in tone. I know from past experience that different parts of the same plant may give different shades, so it’s often a good idea to separate flowers, leaves and stems when testing plants for the first time and prepare a different dyebath for each. It therefore came as no surprise to me that the same holds true for fungi. 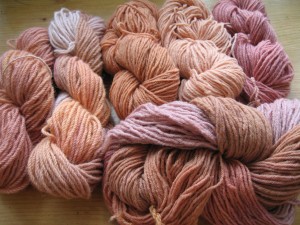 This image shows a range of shades from the stalks.

The two skeins on the left are unmordanted and the other skeins are mordanted with alum.

The unmordanted samples are pretty, reasonably rich shades but they will probably be less fast to light & washing than those mordanted with alum. Time will tell. 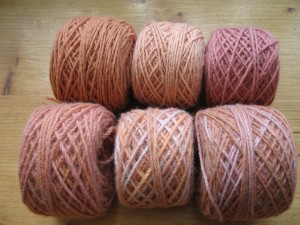 The skeins are now in balls, making it easier to identify them.

In these experiments, a relatively small amount of dyestuff seemed to go a long way. I had 60gms of mushroom stalks and managed to dye a total of about 250gms of wool the shades shown above. I simmered the stalks for about 2 hours then strained off the dye liquid for the dyebath. I then simmered the stalks again to extract every last bit of colour and added that to the dyebath. I dyed the single-coloured skeins first and modified two of them as above. I then dyed the two variegated skeins. To do this, I first dyed the skeins in the dyebath then removed them and gently squeezed out some of the excess dye. I then added modifiers to the end sections of each skein as follows: I dipped one end of each skein in a solution of washing soda and the other end of each skein in an iron solution, leaving the centre section unmodified. I left the skeins to soak in each modifier until there was a clear variation of shades on each skein, then removed them & rinsed them very carefully so there was no iron contamination.

Note: When modifying sections of skeins, rather than the whole skein, it is important to make sure the areas to remain unmodified do not hang below the sections being modified, otherwise the modifer will leech into the rest of the skein. I used to tie the skein to a hook screwed into a beam above the work surface where I have my heat source. However, since my workroom has been re-roofed this beam is no longer available, so I now put a weighted saucepan on top of some bricks & fasten the skein to the handle of the saucepan. Much will depend on the length of the skein but it is often possible to put the two modifier pans next to one another, leaving only a small gap between, and then both ends can be modified simultaneously. 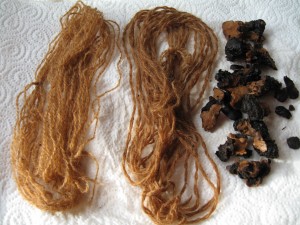 This photo shows the shades from a small sample dyebath of, I think, Trametes versicolor. The dyebath appeared very pale in colour so I was surprised to achieve what is a rather attractive cinnamon brown. The sample on the left is unmordanted and the sample on the right is alum-mordanted. Next to the samples are the used pieces from the dyebath. The pieces came from one of the fungi I found on my walks in the woods & which has been identified by several readers as probably Trametes versicolor. Perhaps the dyed samples above will help to confirm this identification?