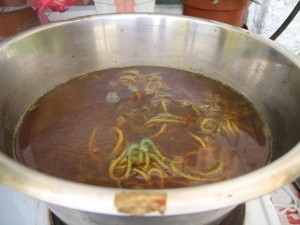 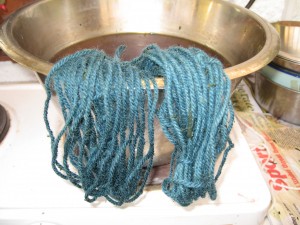 The photos show (left) the vat with the blue colour beginning to emerge as the yarn appears above the surface & (right) the yarns with the blue dye developing.

Last week Ian Howard, the woad grower from Norfolk, sent me a few woad balls to experiment with. Woad balls are rare nowadays & I believe they may only be available commercially from Ian. Of course, woad is simpler to use in powder form & it is only recently that woad powder has become available. Before that, dyers keen to use woad had to grow their own. Until the 1930s woad was grown & processed in England in the fens in East Anglia, not far from where I live. The woad balls were made by crushing the leaves to a pulp between rollers, draining off any excess liquid, then rolling the pulp into balls, which were laid on racks to be dried. Sometimes woad was traded as balls, which then had to be processed further into couched woad before they were ready for dyeing. To make couched woad, the balls were pulverised, sprinkled with water & left to ferment. During this period, the mass was turned frequently & large lumps broken up. Finally, this crumbly substance, known as couched woad, was dried & packed into barrels, ready to be sent off for sale.

But back to my woad balls. As I want to save some for a fermentation vat when the weather is warmer, I just used one for this test. I was surprised at the amount of blue there seemed to be in this one ball, even after I had been distracted by a phone call & let the vat simmer on the cooker – absolutely not a good idea! Not only that, the vat kept going over several days & didn’t seem to mind getting cold overnight & being heated up next morning.

Basically, as I wasn’t planning a fermentation vat, I followed the same procedure as I use for dyeing with fresh woad leaves, except that I left the leaves in the vat throughout. So first of all I broke the ball into small pieces by bashing it with a mallet (yes, woad balls can be very hard indeed!). Then I poured a little cold water over it to just cover the pieces. I did this as a precaution, in case “shocking” it with boiling water destroyed any dye potential, although I think it would probably have been OK to start off with the boiling water. Then I poured boiling water over the pieces, about enough water to make a small vat, & left them to steep for about an hour. I then strained off the liquid, added enough washing soda (sodium carbonate) to turn the liquid from brown to greenish & began the whisking process. At this point, I should say that the smell was quite strong but, as I love the smell of woad, it didn’t bother me at all. Also, the whisking process produced no sign of any blue froth but I decided to continue, as I seemed to recall having had this experience before. After whisking for about 15 minutes, I decided to return the pieces of woad ball to the liquid & then I whisked a little more – still no blue froth. I then poured the liquid, plus woad ball pieces, into a stainless steel pot & set it on my cooker. I heated it gently to about 50C/120F (or as hot as the hand can tolerate for a count of 3 – what I call “1,2,3 ouch!”) & then added some sodium hydrosulphite to remove the oxygen. After about 10 minutes, I decided to add some wool to see if any blue had developed & was delighted with the results. The first skeins were a deep blue/green, later skeins became a little paler, & one skein was a delicate green. The colours on the second & third days were just as strong as those on the first day – probably because leaving the leaves in the vat allows the blue to continue to develop as time progresses. This vat does not look like the usual woad or indigo vats; the colour of the liquid is a murky brown/yellow, although a blue metallic sheen does appear on the surface after a while, only to disappear again later. Neither does this vat give the same shades of blue as woad vats from fresh leaves or woad powder. The blues are tinged with green, so appear more turquoise, although this is not apparent from the photo above. (However, it’s very difficult to show colours absolutely accurately in photos, unless one has sophisticated equipment & considerable skill & I have neither, I’m afraid, being a complete novice where photography is concerned.) I imagine these colours are probably influenced by the other pigments present in the leaves, such as those that give the tan shades when woad leaves are used following the usual simmering method, & the green tones occur because the leaves remain in the vat throughout. I suppose I need to do another vat without the leaves in, to see what happens without them – perhaps at a later date. I also suspect that these greeny-blue shades may be closer to the blues our early ancestors achieved when using the fermentation vat method.

To sum up: Woad balls can be used in the same way as fresh woad leaves, except that the leaves should remain in the vat throughout. Whisking may not produce any blue froth but ignore this & continue as usual. The vat itself will not look like the more usual woad or indigo vats, but this does not seem to be of any importance. The vat can be kept going over several days & the colours from this type of woad vat will be more green in tone.

NOTE: Woad balls are available from Ian Howard, just click on the link under “My Favourite Websites”. Ian also has some excellent weld dyestuff available (not in extract form) which he has grown on the farm & madder extract is also on his list. (See picture below) 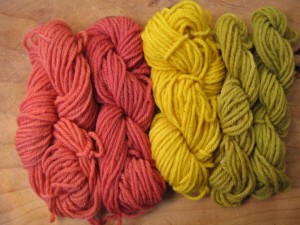