My most recent use of cochineal was to dye some handspun Blue-faced Leicester fleece in readiness for my granddaughter’s winter coat. My daughter asked for a strong pink colour because she wants to make it clear that Milly is a girl and not a boy! Apparently too many kindly old ladies look at her and admire “such a sweet little boy” and this is beginning to cause my daughter, Jessica, stress. I keep telling her that babies and toddlers all tend to look like boys until they have enough hair to display their sex through a suitable hairstyle, but in the meantime my task is to produce garments that have a decidedly feminine bias! 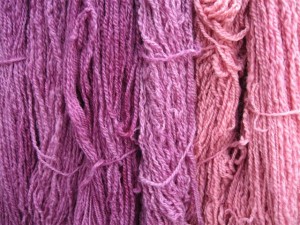 These colours should be feminine enough, I hope!  All the skeins were alum-mordanted and the first three were dyed using a cochineal extract from France. The next skein was from the first exhaust dyebath. For the last skein, I added a teaspoon of madder extract to the remaining exhaust dyebath and this livened up the shade a little.

To be honest, I shall be quite relieved when this desire for pink wanes because, as a vegetarian and supporter of female equality, I have to confess to a certain reluctance to use cochineal, unless I need a colour that can’t be achieved from any other dye. This reluctance is because the dye colour in cochineal is contained in the bodies of female scale insects of the Dactylopius species, which live on species of Opuntia or prickly-pear cactus, and many thousands of insects are required to make a relatively small amount of dye colour.

The cochineal insect is probably native to Mexico but spread elsewhere in Central and South America. Today, Peru is the main producer of the dye and cochineal is also farmed in the Canary Islands, where it was introduced as a commercial crop in the 19th century.

Cochineal is a precious commodity and correspondingly expensive. However, a little goes a long way and full colours can be achieved using as little as 10% cochineal per weight of materials to be dyed, although the depth of colour may also depend on the chemical composition of the water used.

The shade of red for which cochineal probably became most famous is a brilliant scarlet, the colour of English huntsmen’s jackets. This colour was found, possibly by accident, in the early 17th century by a Dutch engineer and alchemist, Cornelius Drebbel, who discovered that the addition of tin to cochineal resulted in a brilliant red colour. Once dyers had mastered the use of tin in cochineal dyeing, this red colour was much in demand. It was used for British army officers’ uniforms and Gloucestershire became famous for scarlet woollens dyed with cochineal and tin.

This red can be re-created by the addition of 7% tin (stannous chloride) and 8% oxalic acid to the prepared cochineal dye bath and in the past I have successfully used it on unmordanted wool fibres. (See photo below.) Nowadays I prefer to avoid tin and the chemical oxalic acid, as they are among the more toxic chemicals and not really necessary for my purposes. But Drebbel’s Scarlet is certainly an amazingly brilliant shade of red. 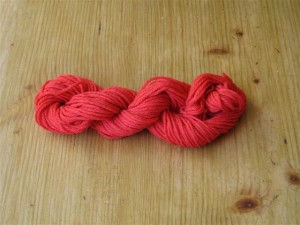 Dyers living in areas where the tap water is hard, rather than soft, sometimes report that they find it difficult to obtain strong colours from cochineal. One possible solution would be to use distilled water or rain water. Alternatively, water for the dyebath can be boiled and left to stand to allow any sediment to sink to the bottom. The water can then be carefully poured or siphoned off, without adding the sediment to the dyebath. The tap water in my area is hard, with a pH value of  7, which is neutral, so hardness may be more of a problem in areas where the pH value of the water is too alkaline (ie above pH8). If this is the case, reducing the pH of the water by adding a teaspoon or two of citric acid or cream of tartar might help. I sometimes add citric acid to the cochineal dyebath if the dyed colour appears too purple in tone and this shifts the colour towards red.

Many dyers use cochineal in powdered form – either purchased as a powder or ground in a mortar and pestle or a coffee-grinding machine. However, in my experience the powder particles can sometimes be very difficult to remove from the dyed fibres, unless the dye bath is strained through a coffee filter paper before use. The cochineal insects can also be used whole or partially ground and, if I am using whole insects rather than the extract form of cochineal, I use the multiple extraction method to extract the colour. This means that the cochineal dyestuff is simmered two or three times for about 15 to 20 minutes and each time the dye liquid is strained off into the dye pot. The combined liquids form the dye bath.

To start with, pour boiling water over the cochineal and leave it to steep for 20 to 30 minutes. Then add more water if necessary to ensure the liquid doesn’t boil dry and simmer the cochineal for 15 to 20 minutes. Then strain off the liquid through muslin or a fine-meshed sieve into the dye pot. Repeat this process twice more, using the same cochineal dyestuff. If you are using powdered cochineal, strain the dye liquid through a coffee filter paper each time and strain again before use. If any scum has formed on the surface, remove this with kitchen paper before using the dye bath.

Then add the fibres, plus more water if necessary to enable them to move freely in the liquid, raise the temperature gradually and simmer for 30 to 45 minutes. Leave to cool, preferably overnight, then rinse well and wash the fibres in a pH neutral washing medium. I usually use dishwashing liquid, which is ideal for washing dyed materials.

Cochineal is also readily available as an extract and in this form it can simply be dissolved in hot water and then added to the dyebath. Half a teaspoon of dye extract will usually dye 100gms of fibre a rich shade. The fibres are then added and dyeing proceeds as described above.

An alum mordant produces shades of pink and pinkish red on all fibres. For pale pinks use 5% cochineal (i.e. 5gms cochineal per 100gms dry weight of fibres) and for deeper shades increase the amount to between 15% and 30%, depending on the depth of colour required. Prepare and use the dye bath as described above.

In Peru, where chemical mordants may be difficult to obtain, cochineal is sometimes used without a mordant on animal fibres. The following method will give a rich tomato-red if the right amount of acid is added. Use 20% to 30% cochineal and prepare the dye bath as described above. Then gradually add drops of either clear vinegar or lemon or lime juice, stirring well as you proceed, until the liquid is a bright red-orange in colour. Be careful not to add too much acid, or you will miss the red and end up with orange. If you add too little, the fibres will be too brown in tone. Stir well again, then add the unmordanted fibres and continue as described above. If necessary, soak the fibres after dyeing for 15 to 30 minutes in a weak solution of water and clear vinegar to brighten the colour. 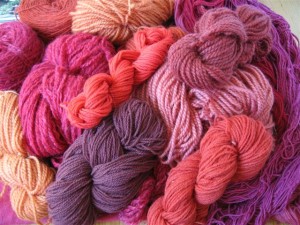 This photo shows a range of shades from cochineal

Update on my books“Wild Colour” Facebook Page
Scroll to top