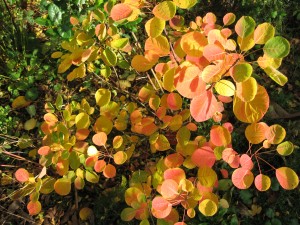 Before the last leaves dropped, I managed to photograph my Smoke Tree & I thought I’d write an entry about this interesting & historic dye plant. Formerly Rhus cotinus & now Cotinus coggygria, the Smoke Tree is also known as the Wig Tree & Venetian Sumac. Its other name is Young Fustic, to distinguish it from Old Fustic, which was a later introduction from central America & is what we now know as Fustic. The word “fustic” apparently came from the Arabic “fustug”, meaning “bush”, & describes the growth habit of Cotinus coggygria. It is native to southern & central Europe & is also found in Turkey. It was widely introduced elsewhere & is a popular ornamental shrub in parks & gardens, particularly the purple-leaved varieties.

From the Middle Ages onwards, the heartwood & leafy branches of Young Fustic were widely used in Europe, especially Italy, for dyeing silk & wool, often in combination with other yellows, such as weld, as the yellow shade from Young Fustic tends to have a reddish hue. In addition, it was used with many other dyes to create a variety of colours & was not only versatile but also more economical than some other yellow dyes, as the heartwood has considerable tinctorial power. Its main disadvantage would seem to be its relatively poor fastness when compared with dyes such as weld, as most shades from Young Fustic tend to change to russet over time. In the past it was clearly a significant dye, as tests on many historical textiles from various parts of the world show evidence of Young Fustic, often in combination with other dyes to create compound colours. It is rich in tannin, so when used with iron it gave deep, full shades. Young Fustic continued to be of economic importance until the 19th century & was used until very recently in country districts of Albania.

The dyestuff we now know commonly as “Fustic” comes from the heartwood of Morus tinctoria or Chlorophora tinctoria, a member of the mulberry family, which grows in central America & is one of the few natural dyestuffs that continue to be used commercially. Once the sea routes to the Americas were established, Fustic was imported into Europe, where it was called “Old Fustic” in English & “palo fustete” in Spanish, indicating that the similarities in both appearance & dyeing properties between “Young Fustic” & “Old Fustic” had been recognised. Indeed, in 16th century Britain it was often difficult to tell whether the term “fustick” referred to “Young” or “Old” fustic. Sometimes both “Young” & “Old” fustics were used in combination to create an orangey shade. For further fascinating information about fustic, & virtually every other dye source, I strongly recommend Dominique Cardon’s “Natural Dyes”. This is a weighty volume, & not cheap, but it is a highly readable scholarly work that provides a most valuable resource for those seeking information on dyes & dyeing from earliest times to the present day.