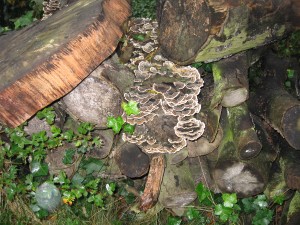 Last week I took my husband & a friend to visit The Manor at Hemingford Grey, near St. Ives in Cambridgeshire. This remarkable house, parts of which date back to 1130, is probably the oldest constantly inhabited house in England & was the home of the author Lucy M. Boston until her death in 1990. The Manor is now the home of Lucy Boston’s daughter-in-law, Diana Boston, & can be visited by appointment. It is difficult to describe the magic & atmosphere of the house & its gardens. The house is full of memories of Lucy Boston’s fascinating life & personality & also contains many of the items Lucy wrote about in her Green Knowe series of books for children.

The garden is a wonderful, magical environment. The more formal areas include collections of beautiful & rare roses & bearded irises & some fantastic examples of topiary. But it is the secret garden which particularly attracts me, with its moat & trees providing shade & mystery.

One majestic tree which features in Lucy’s stories sadly had to be felled a little while ago & its trunk now lies on the ground, providing a home for a beautiful collection of bracket fungi & lichen. This reminded me of a student at one of my summer school courses, who brought with her a selection of woollen samples dyed using bracket fungi. The colours ranged from lemon yellow to rusts & browns & this was the first time I had come across the use of bracket fungi as dyes. I have to confess that, to me, the bracket fungi are too beautiful to collect to produce colours which can be so readily obtained from other sources. I prefer to leave them alone. But if you have bracket fungi in your garden & need to remove them from their hosts, or if they are on branches waiting to to be chopped for firewood, it may be worth experimenting with them in the dyepot. Use an alum mordant & try out some of the colour modifers to vary the shades. (See the section on Dahlias for details of using colour modifiers.) 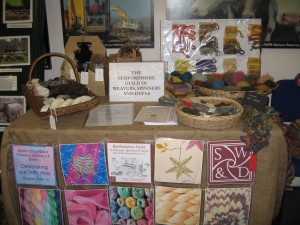 Yesterday I joined with fellow members of the Bedfordshire Guild of Weavers, Spinners & Dyers to demonstrate handspinning at the RSPB (The Royal Society for the Protection of Birds). The guild, of which I was a founder member, is currently celebrating its 30th anniversary. We usually demonstrate at the RSPB twice a year, in August & at their Feed the Birds Day in October. The RSPB centre at Sandy, Bedfordshire, has a flock of Manx Loghtan sheep & members of our guild spin some of the fleece from these sheep & then make items for sale in the shop in aid of RSPB funds. The photo shows our display, including naturally dyed samples, some dyed by me & some by my friend, Chris, with whom I have been sharing dyeing experiences for many years. Chris is also a plant expert from whom I have learned many useful tips & information.

Demonstrating spinning & talking to the public about dyeing are always interesting. This time I was surprised & delighted by the level of interest, especially in natural dyeing, shown by some of the children. One little girl in particular, probably about 10, asked quite detailed questions & seemed really attentive to the answers. One always wonders how much information to give, especially where mordants are concerned. I try to answer as fully as possible but without making the matter so complicated that it puts people off. At times like these I realise just how complex natural dyeing actually is.

Without wishing to appear sexist or guilty of gender stereotyping, it is also interesting to note that there is often a difference between male & female areas of interest. Men usually want to know the technicalities of spinning & spinning wheels, while women tend to enthuse more about the fleece & the spun yarns & what they might be used for. However, when with children, both men & women want the children to appreciate & understand that what we are demonstrating is closely linked to the clothing people are wearing & how it is produced. Most children don’t realise that cotton comes from a plant (indeed, why should they if they haven’t been told?) but tend to know that wool comes from sheep. Yesterday one of our members was spinning alpaca fleece from her son’s alpacas & one child actually knew that alpacas were related to llamas! Such contact with the younger generation fills one with optimism.

Last Saturday I visited the Oxford Guild of Weavers, Spinners & Dyers to talk to the members about “Using Natural Dyes”. I always enjoy visiting this guild as the members are welcoming, lively, attentive & appreciative – who could ask for more? They are the speaker’s dream! And they produce excellent tea & cakes too! I was particularly delighted to find so many younger members interested in using natural dyes. Indeed, I sold 11 copies of my latest book “Colours from Nature”, which was more than I had expected to sell.

If anyone is interested in obtaining a copy of this book, or finding out more about it, email me at jenny@waltoncreative.com. “Colours from Nature” is a self-published handbook, which contains full details of my approach to natural dyeing, mordanting etc, plus over 100 recipes arranged according to colour, including the insect dyes & natural dye extracts. It has some colour photos & many colour sample swatches. To addresses in the UK it costs £13.50, including postage, more for overseas orders.

Incidentally, I am still trying to persuade my UK publishers to issue a reprint of “Wild Colour”. I’m not holding my breath for a favourable response but I’m not giving up yet either.

Welcome to Jenny Dean’s website blog! This is my first venture onto the web, courtesy of my husband, Roger, who arranged this site for me as a birthday-cum-Christmas present.

The designer of this site is Colin Walton, who also designed my book “Wild Colour”, published in 1999 and now sadly out of  print. As I am mainly known as the author of this book, I have chosen “Wild Colour” as the heading for my blog. It will probably be a little while before the site design is complete & the blog is up & running. But in a few weeks time I should be able to write regular reports of my activities, with general tips & hints for the natural dyer, dye recipes & suggestions for the dye garden.